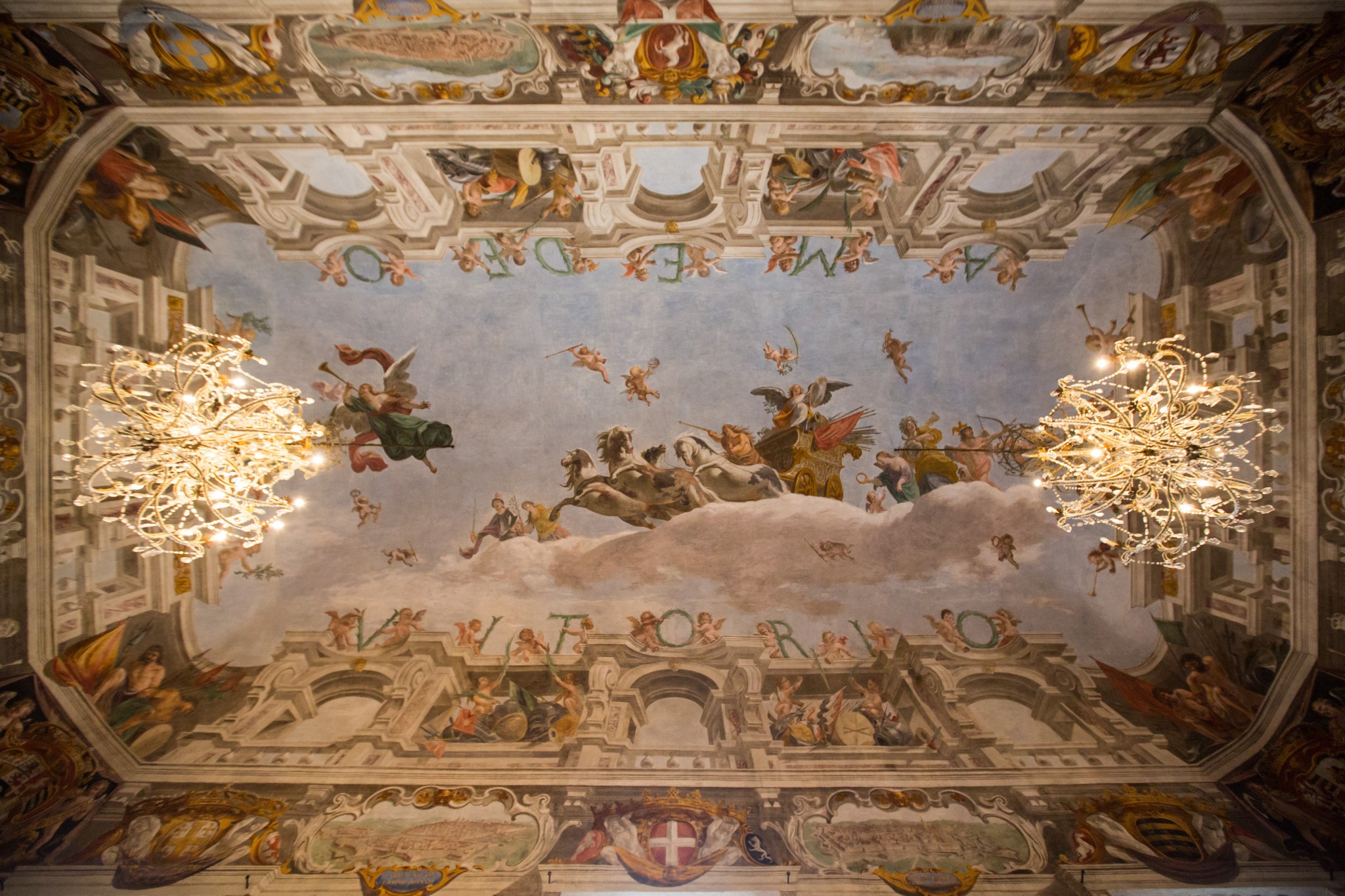 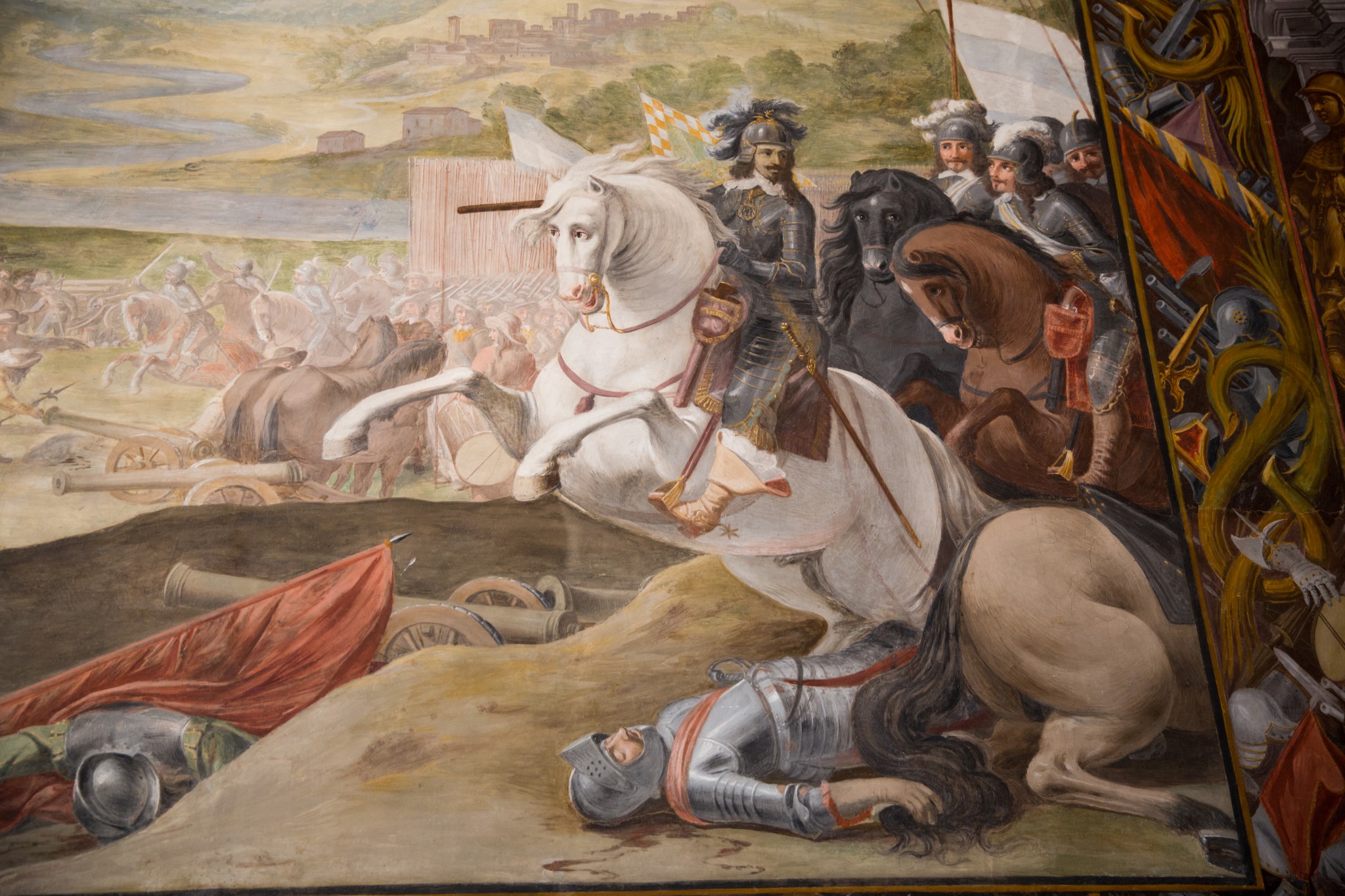 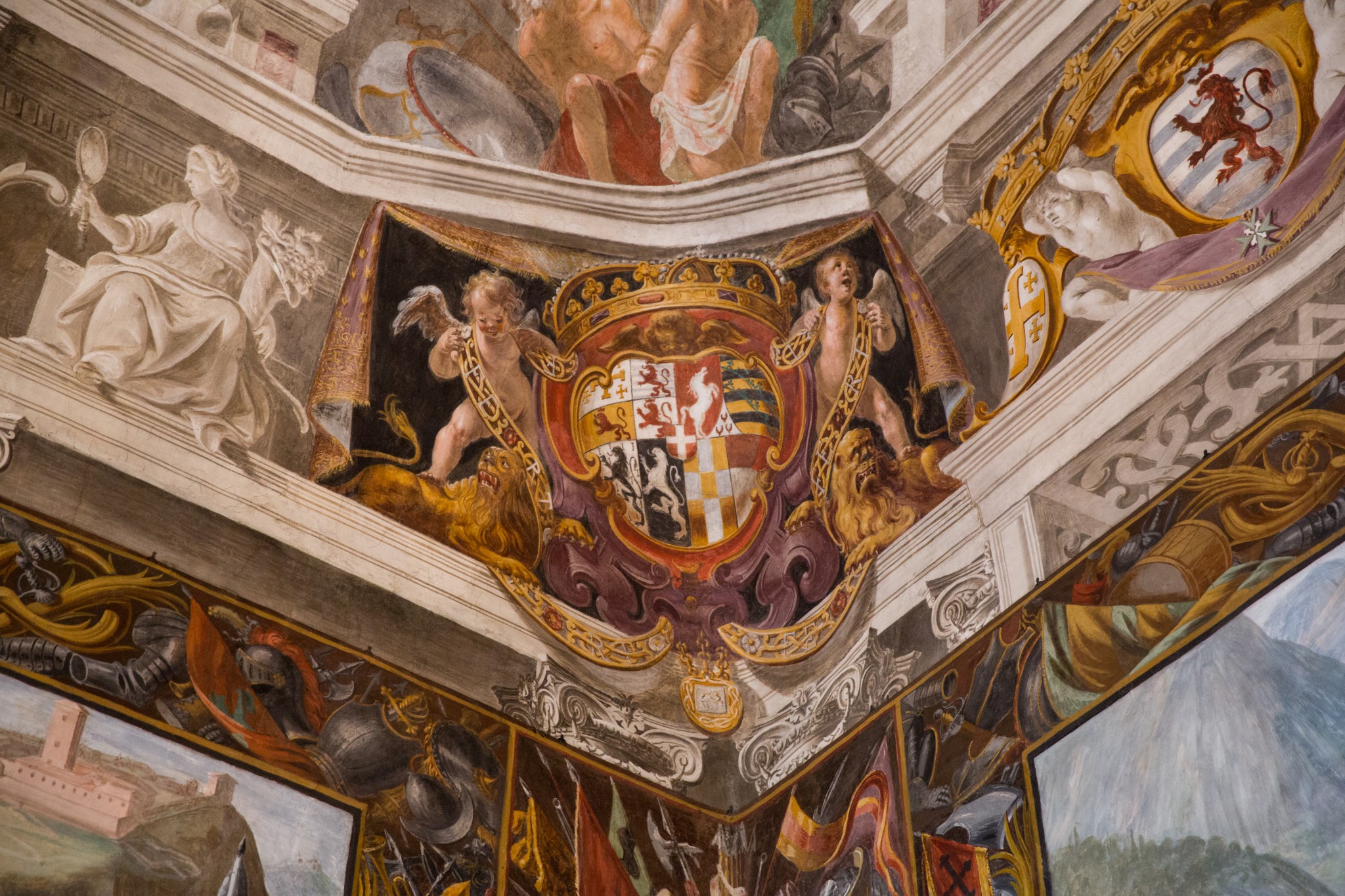 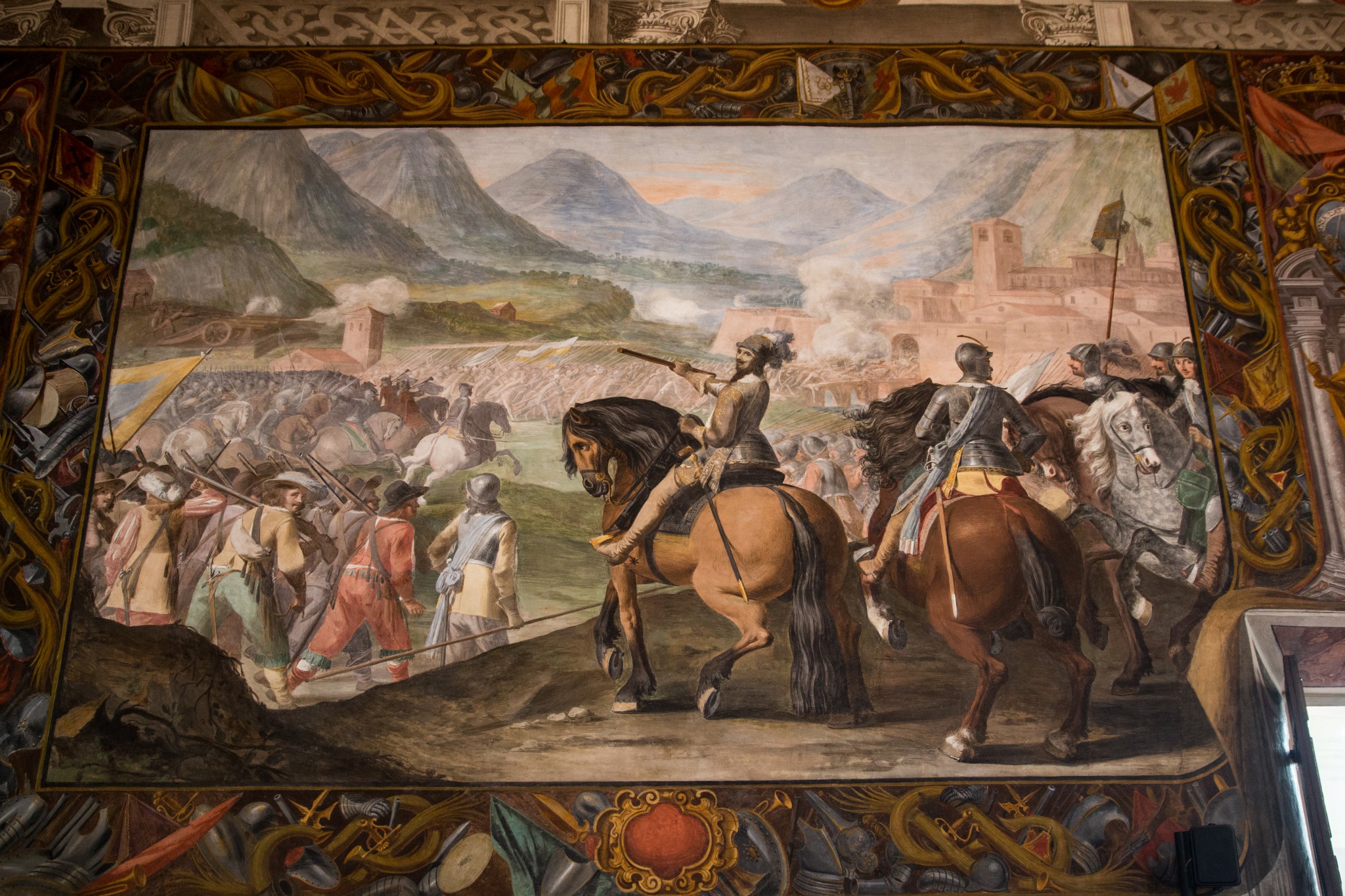 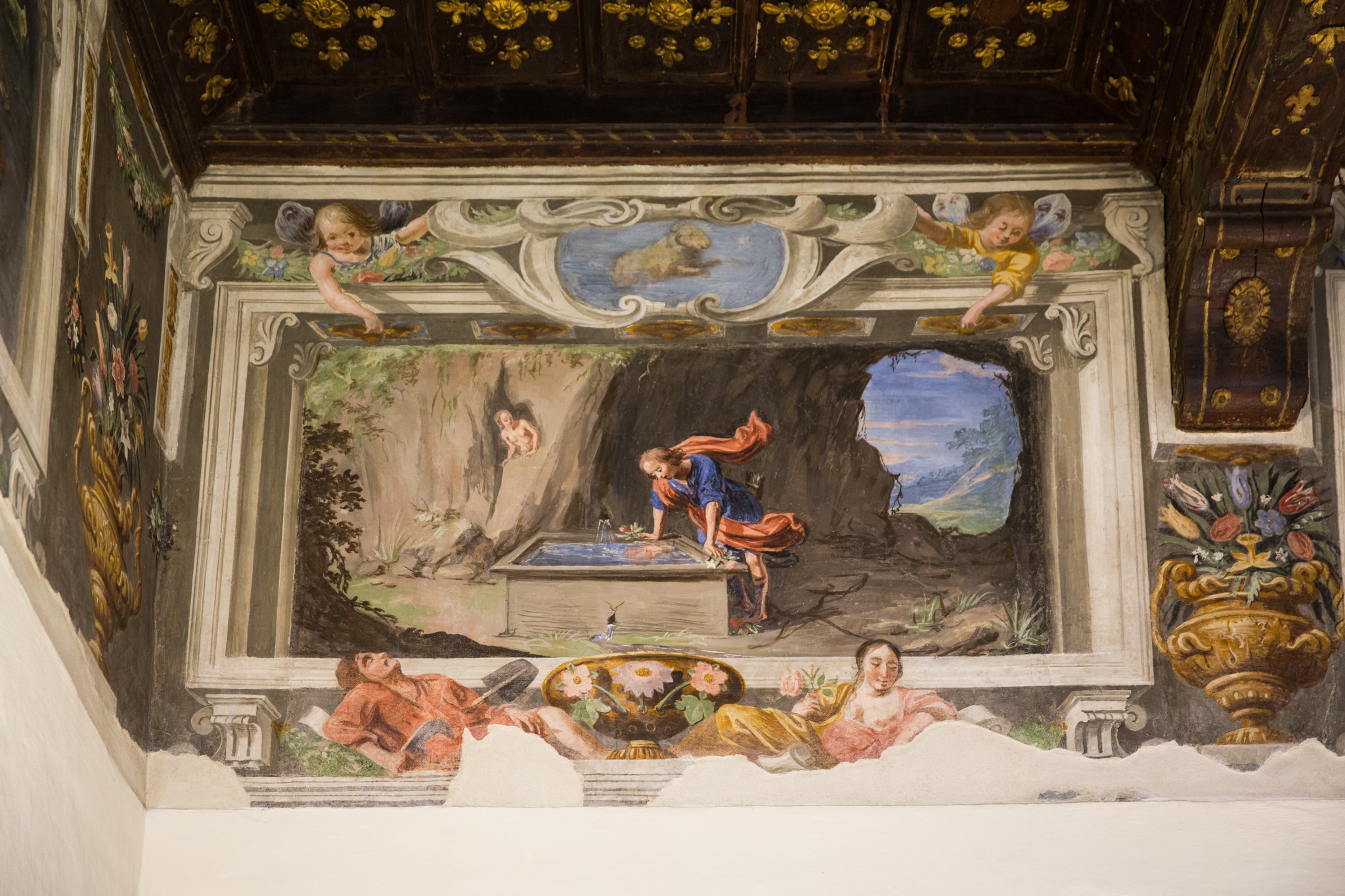 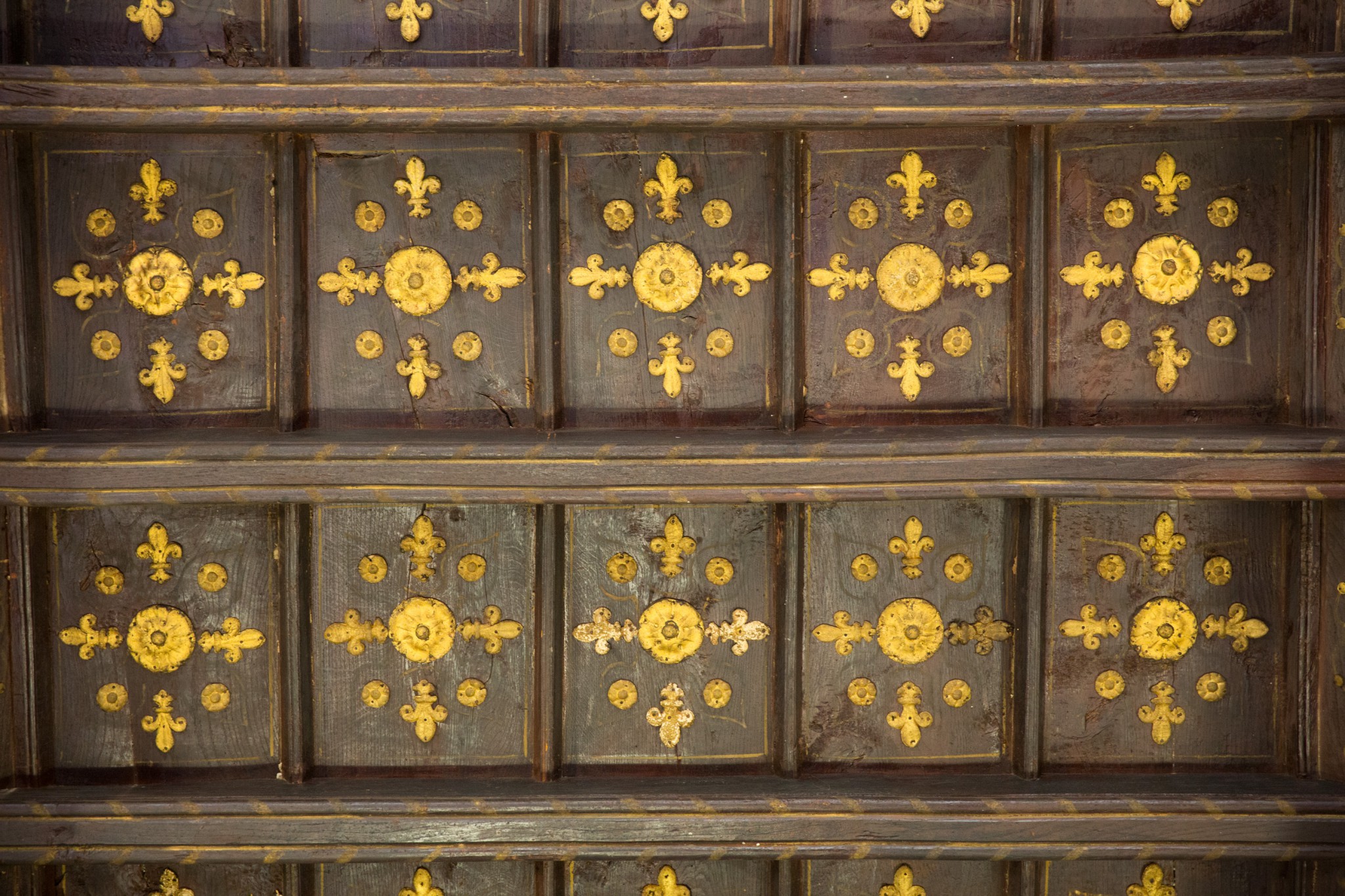 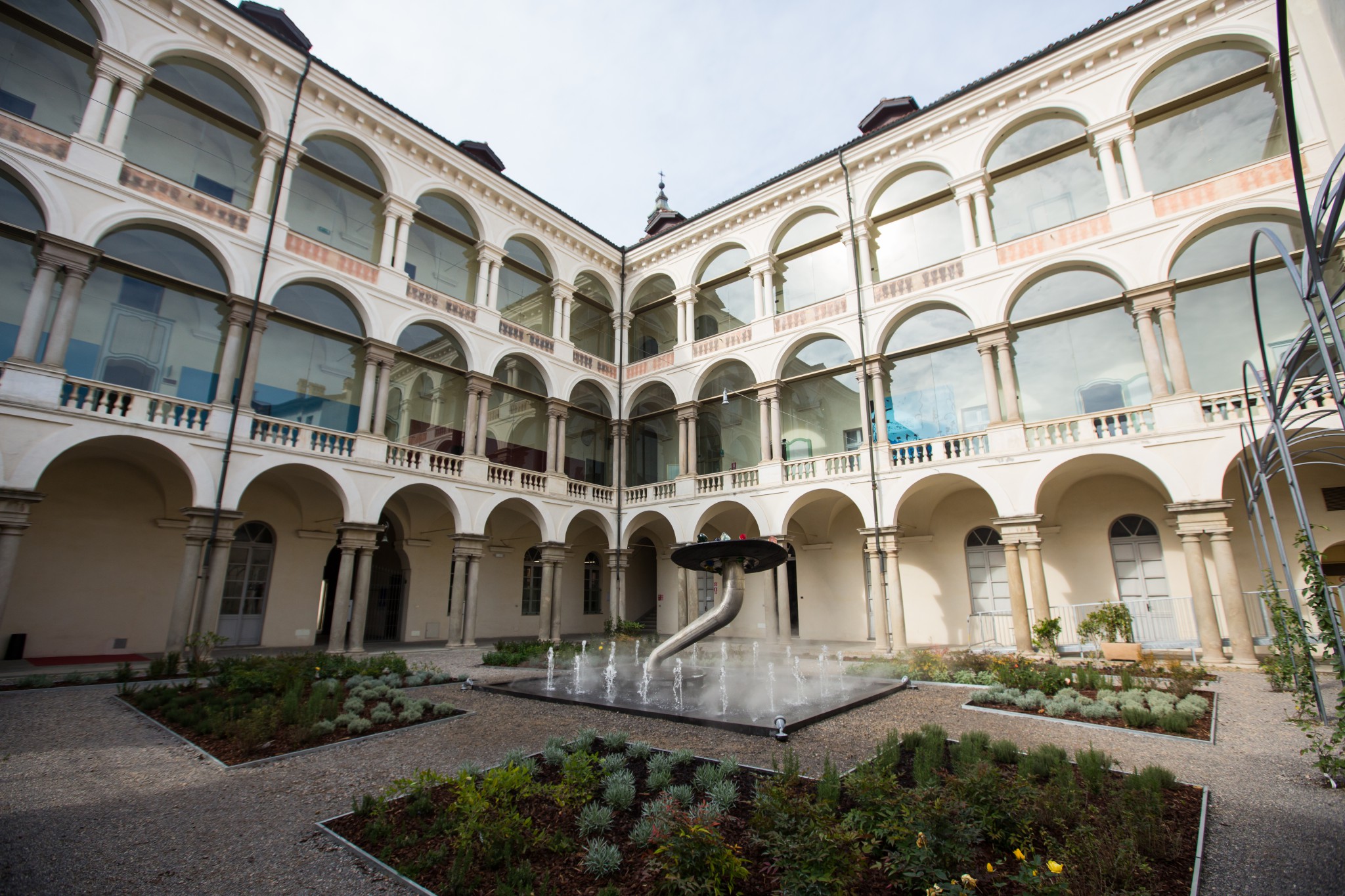 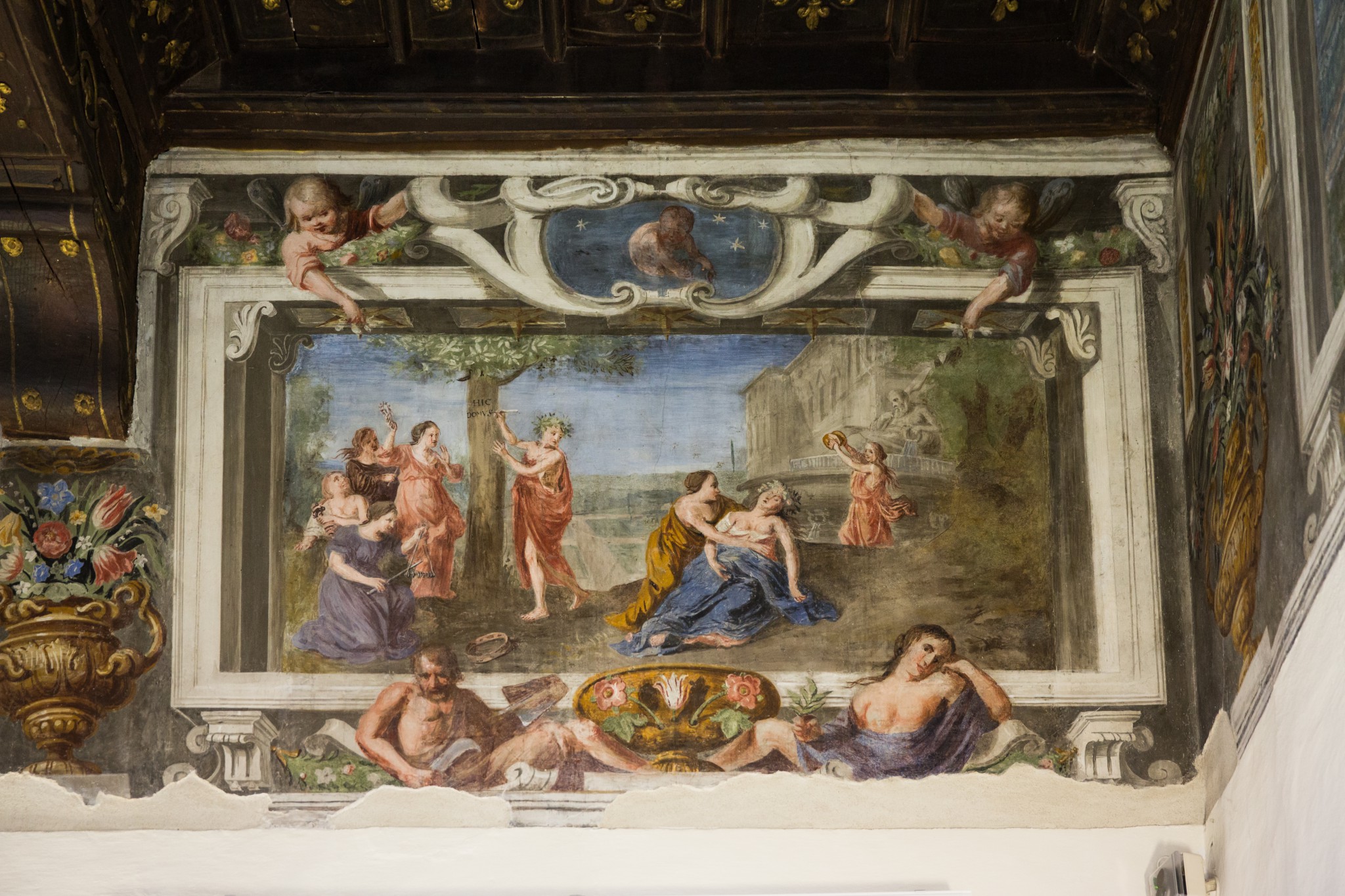 Palazzo Taffini has exceptionally refined architectural lines. Three storeys of arches, elegant columns and white balustrades mark the internal walls of the building which is arranged in an ‘L’ shape and overlooks two internal courtyards. At the beginning of the 17th century Camillo Taffini bought the land where he decided to build his noble family home. His son Giusto Aurelio was the governor of Savigliano for sixteen years, from 1643 to 1659. The family, originally from Turin, were politically and strategically linked to the Savoy court, became citizens of Savigliano in 1590, and soon made a fundamental contribution to the cultural development of the town.
Inside on the first floor there is a stunning frescoed reception room the ‘salone d’Onore’, as well as the Múses Accademia Europea delle Essenze. The second floor houses the Libera Accademia d’Arte Novalia , a school for perfecting visual art techniques, which runs various courses on children’s illustration, cartoons, painting, photography and much more.

Salone degli Dei The salone degli dei is a single room created from the joining of two previously separate rooms. This division can be seen clearly by looking at the two parts of the ceiling, one a coffee coloured wood with gilded inlay, the other green with plant decorations. The two rooms were joined and the wall that separated them knocked down by the Rosine nuns who made a space here for a private chapel, the ideal place for their moments of prayer. The decorative band around the walls has recently been restored and shows mythological events framed by flowers. In the second room the frescoes are inspired by the essay published in 1638 by Giovan Battista Ferrari, the De Florum Cultura, which narrates the myths of the gods and the birth of flowers and plants. Easy to recognize are the story of Narcissus, intent on admiring himself in a pool, a banquet for the gods with Zeus in the foreground, the metamorphosis of Fiorilla into flowers and melissa into bees, the dispute between Art and Nature, the chariot of the moon personified by the goddess Diana. Above each painting there are the symbols of the signs of the zodiac. 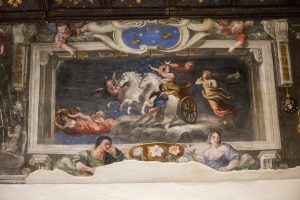 Libera Accademia d’Arte Novalia La Libera Accademia D’Arte Novalia is an art academy that uses innovative teaching methods to train people in the most important professional fields in the art world today. It runs three year courses in visual arts, organised in a curriculum in accordance with the current laws for higher education and is preparing the paperwork for ministerial recognition. The three year training course was conceived to create an elite of professionals able to move with awareness within a vast range of artistic skills, learned through a well-organised and coherent course of studies, during which the students learn the basic techniques needed to acquire the technical skills necessary for their application, including with the most sophisticated modern technology and 3D digital design. The primary objective is to create an exchange between young people and professionals, to pass on the notions of the craft and teach the technical-practical aspects of the visual arts, to prepare them for the world of work so they can dedicate themselves to their profession with enthusiasm.

The Battles The wars of Succession between Mantua and Monferrato saw the Savoy army deployed against the Spanish troops. Monferrato was a fundamental strategic corridor that connected the Spanish dominated territories in Italy with the Hapsburg territories in Germany. In 1559 the Gonzaga family, dukes of Mantua, took possession of Monferrato for the Spanish. But in 1612, upon the death of Franceso IV Gonzaga, Carlo Emanuele I tried to reoccupy the area, leading to the first war at Monferrato, which was concluded with the ‘Pace di Parigi’ (peace treaty) in 1617. In 1627 a second war broke out at Monferrato, more bloody and cruel than the first as it was fought between Spain, the Duke of Savoy and France. Upon the death of Carlo Emanuele I in 1630, his son Vittorio Amadeo I continued the war. In the ‘salone d’onore’ in Palazzo Taffini we can see the Duke of Savoy at the battle of Crevacuore (above is an illustration of the city of Turin), the taking of Moncalvo (Trino Vercellese), the siege of Verrua Savoia (Asti), the conquest of the Parish of Oneglia (Sant’Ospizio), the battle of Tornavento (Breme), and finally the battle of Mombaldone (Alba) in 1637, where the Savoy troops finally won the day. 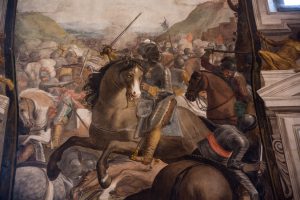 Múses European Academy of Essences The seventeenth century rooms inhabited by Isabella of Savoy, now house the MÚSES – Accademia Europea delle Essenze. Múses is a techno-sensorial museum centre that takes the visitor on a fascinating journey to discover the tradition of medicinal plants from the area, the art of perfume making, the essences and flavours of Piedmont. The perfect union between history, contemporary art and technology. 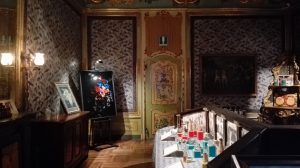 Salone d’onore The first floor was for receiving guests. The salone d’onore, completely covered in frescoes from the sixteen-hundreds is 10.3 metres high and fills the onlooker with ecstasy and amazement. It truly exalts the glory of the House of Savoy. On the ceiling a golden chariot triumphantly carries the winged Victory, surrounded by festive cherubim. On the sides little angels interweave palm leaves to create the name Vittorio Amadeo, the hero of the frescoed battles. They depict the War of Succession of Monferrato, which occurred between 1617 and 1637. The figure of the Duke of Savoy dominates every battle scene, always accompanied by Taffini, who leads the armies alongside him. The horses catch the eye of the observer, with their imposing dimensions and musculature, frescoed in minute detail, each with its own markings and with an almost human look of complicity. On the sides of the walls are geometric patterns, weapons, armour and shields, captured enemies exhibited like trophies and the Savoy knot which is the emblem of the House. The overall effect of the scene is unusual: the battles are depicted on fake tapestries which curve near the doors and windows, as if drawn back to allow people to pass. A copy of the balustrade of the building is painted all around the walls, giving the strange sensation of being on an open-air terrace. For many years the cycle of frescoes was erroneously attributed to the Saviglianese artist Giovani Antonio Molineri, a hypothesis that did not hold up as the dates are incongruent. Among the names suggested for the authors of this work are Giovenale Boetto and the Flemish Jean Claret, although the true identity of the artist is far from certain. 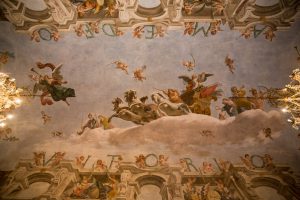 HISTORY OF THE BUILDING

HISTORY OF THE BUILDING The Palazzo was built in the 1620s to a design by the architect Ercole Negri di Sanfront and was inhabited until 1878 by the Taffini family, who commissioned its construction and the precious interior decoration. From 1731 to 1736 Isabella di Savoia Carignano lived in these rooms, and made several modifications that followed the needs and tastes of the time. The Regio Istituto Caritatevole delle Rosine (the royal charity institute of the Rosine nuns) bought the building in 1898 and transformed it into a nursery school, bringing help and good works to the poor people of Savigliano for many years. In 1976 the Cassa di Risparmio di Savigliano bank purchased the building and immediately began work to restore it, returning the building to its ancient splendour. Today the Palazzo is a representative venue for the Cassa di Risparmio di Savigliano. It is used for conferences, meetings and concerts and is still a primary centre for the cultural development of the town. Its frescoed rooms can be visited thanks to guided tours organized by the Savigliano Tourist office. It also houses MÚSES – European Academy of Essences, an interesting sensorial itinerary to discover the medicinal plants from the area. 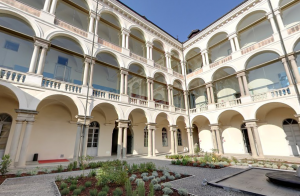