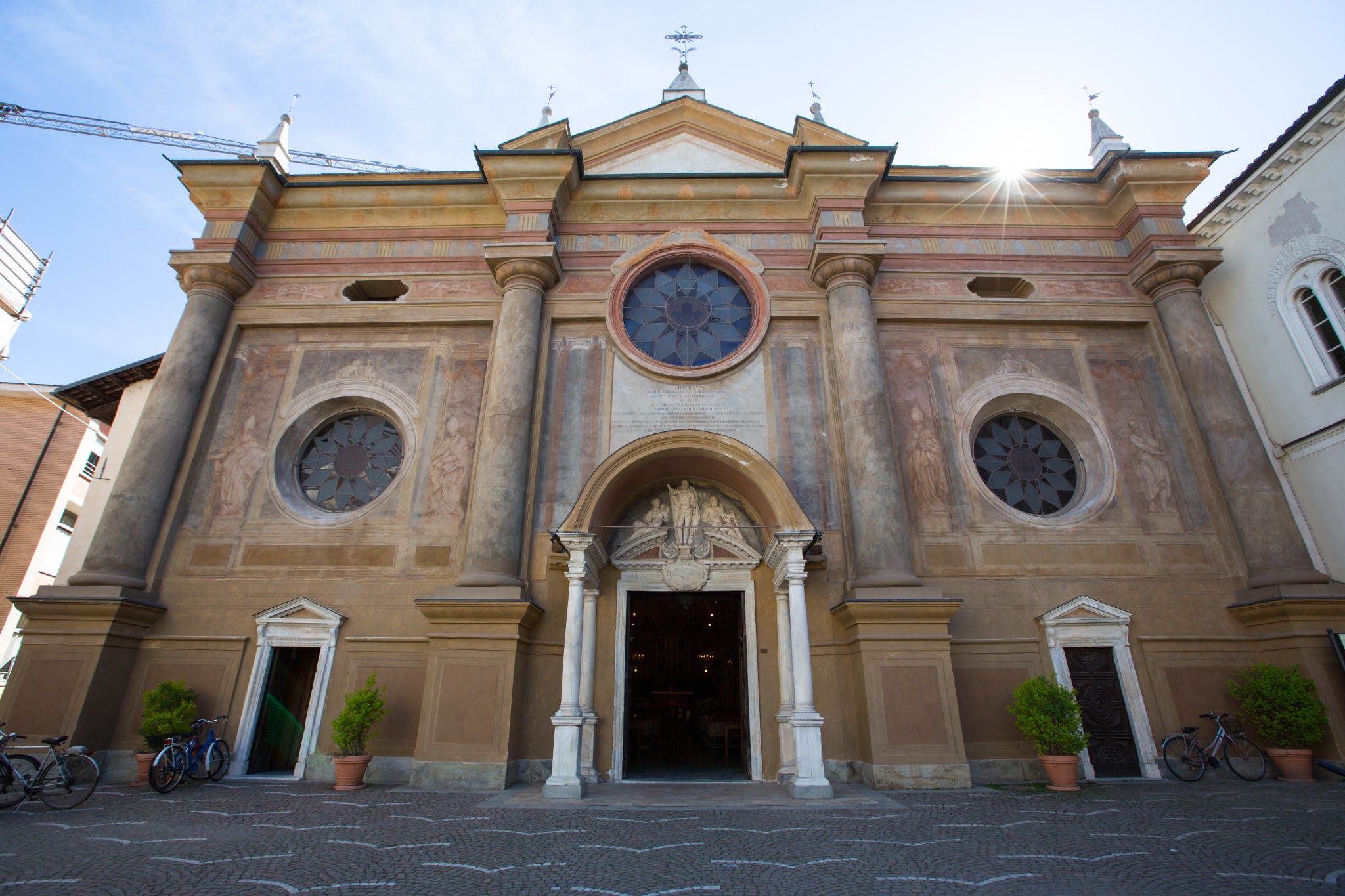 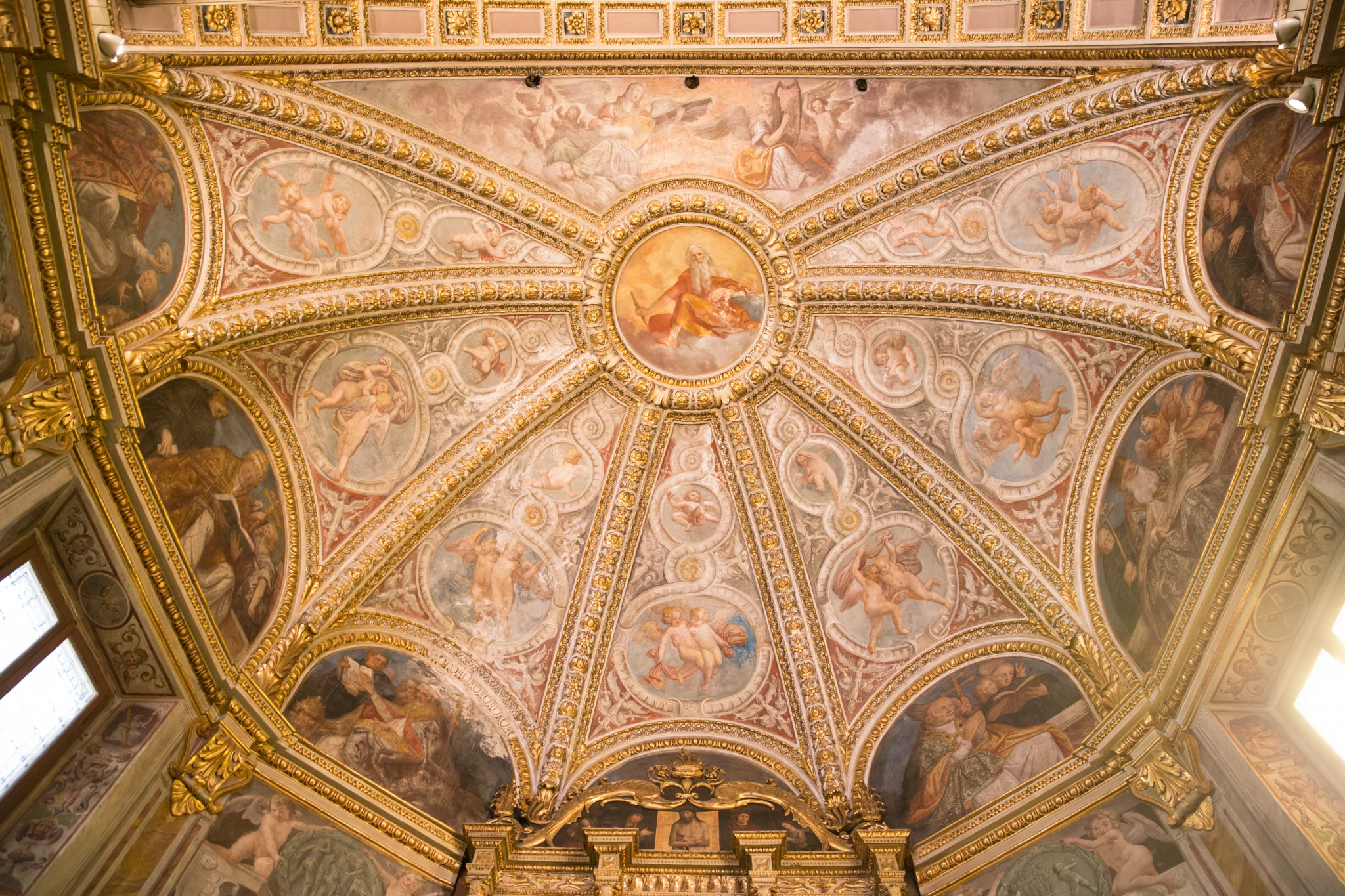 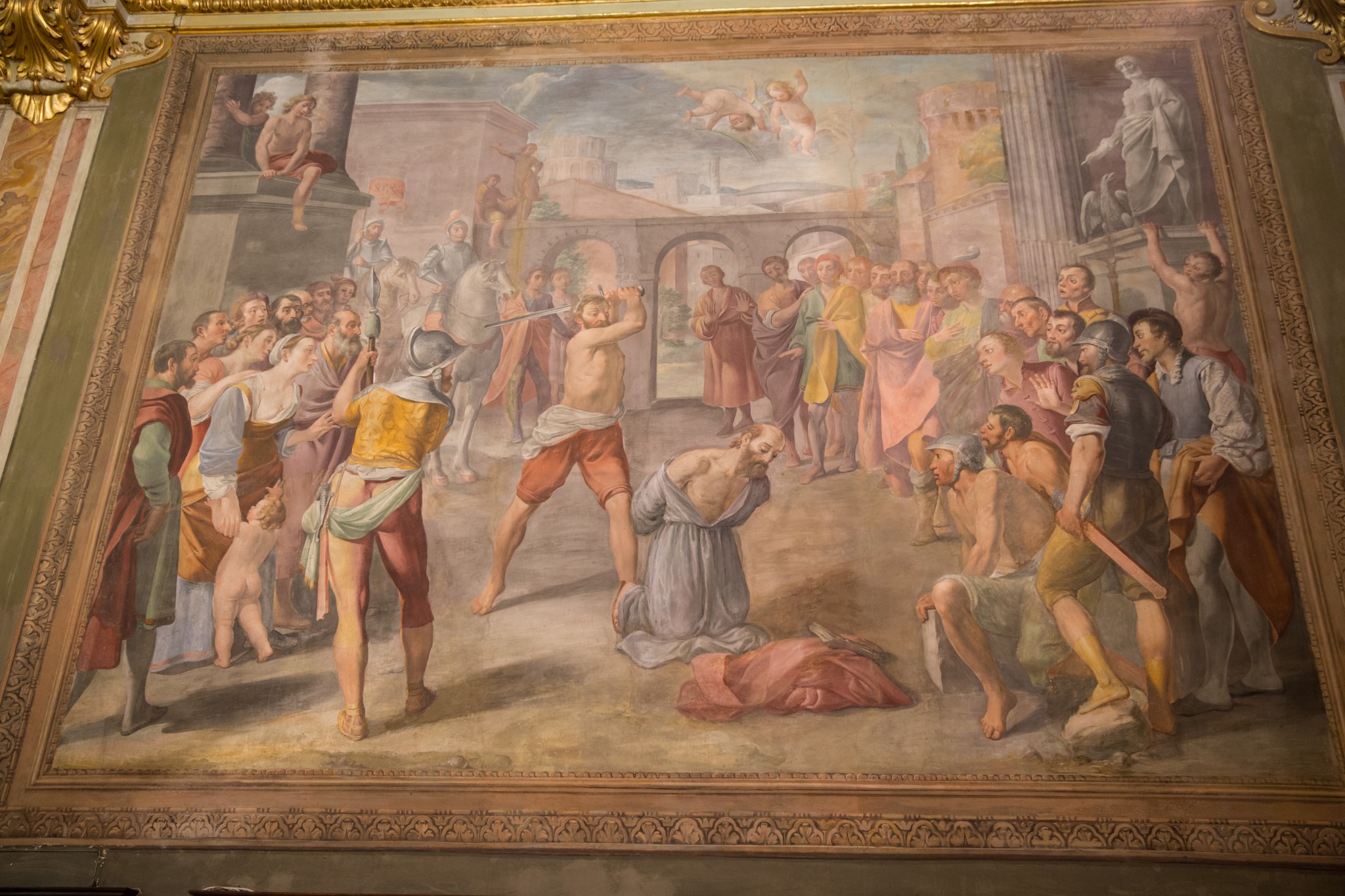 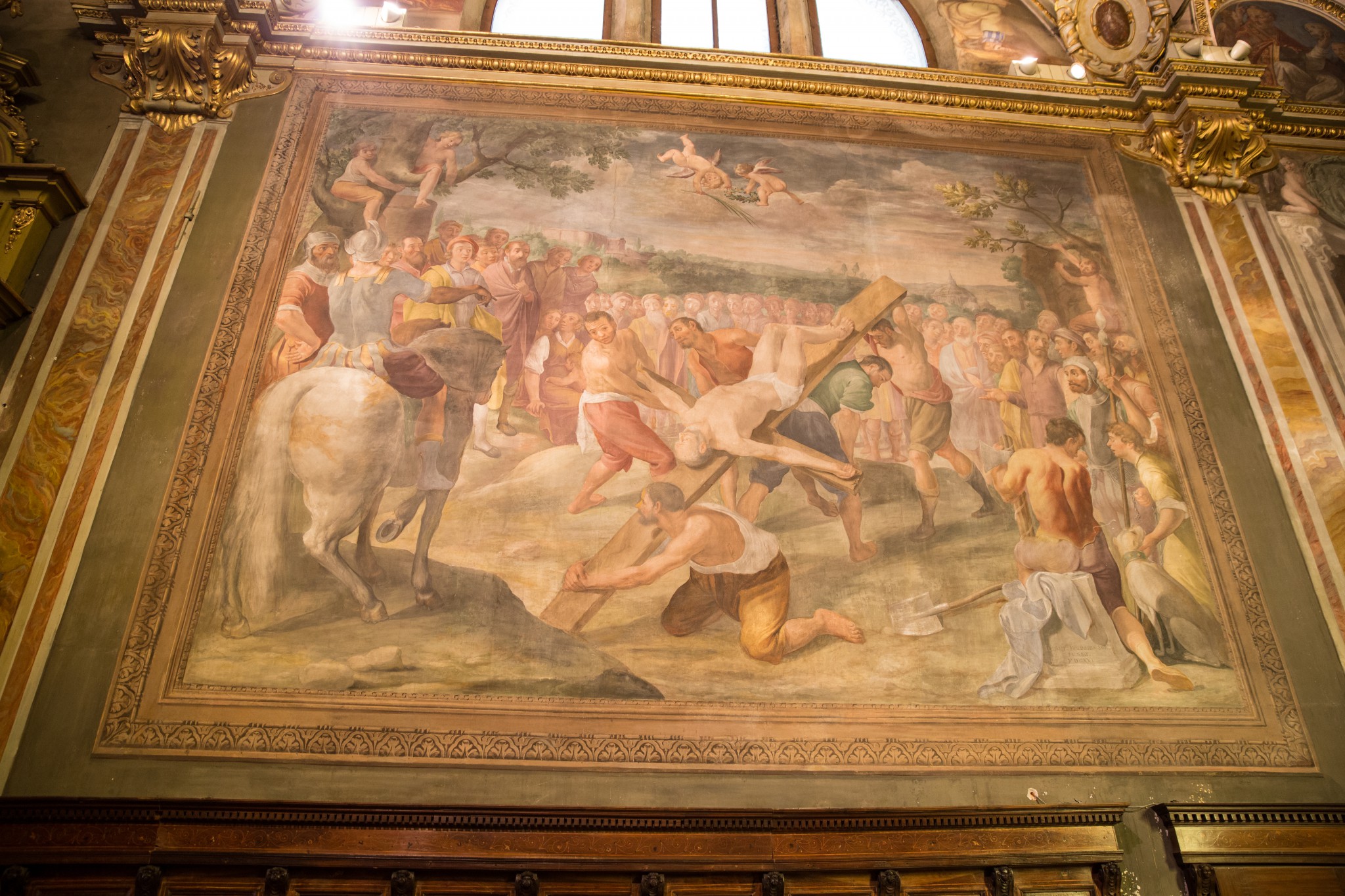 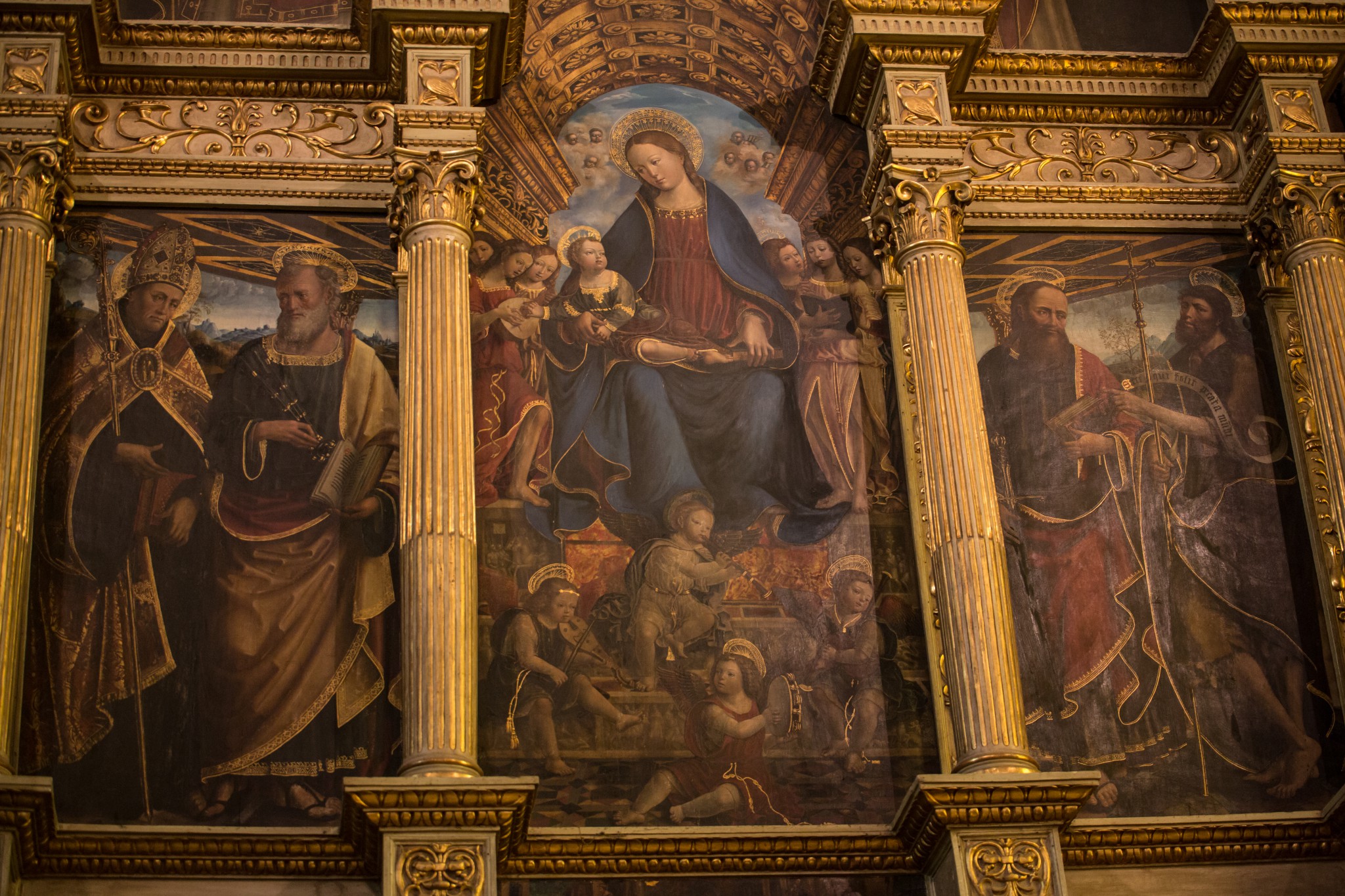 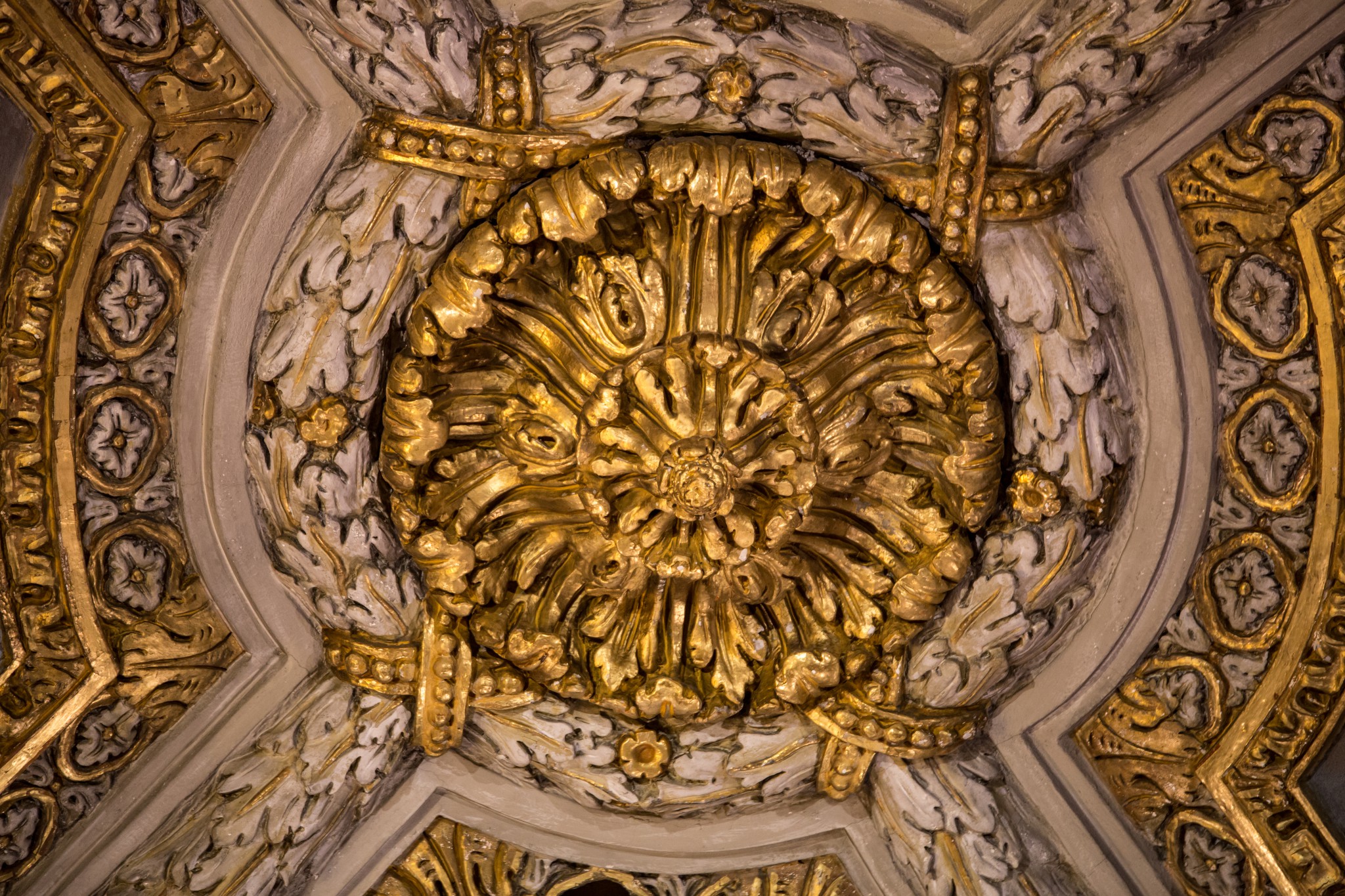 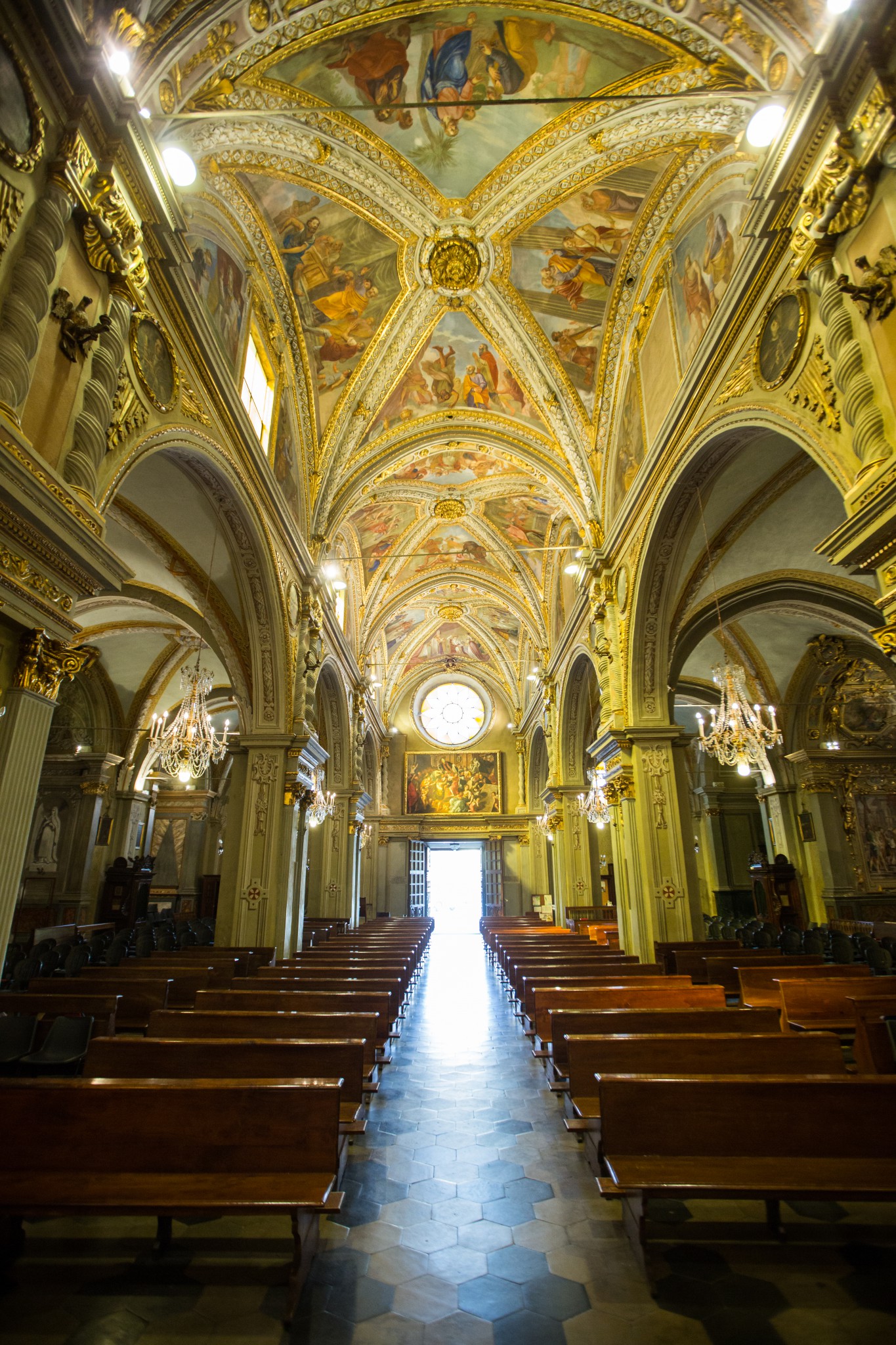 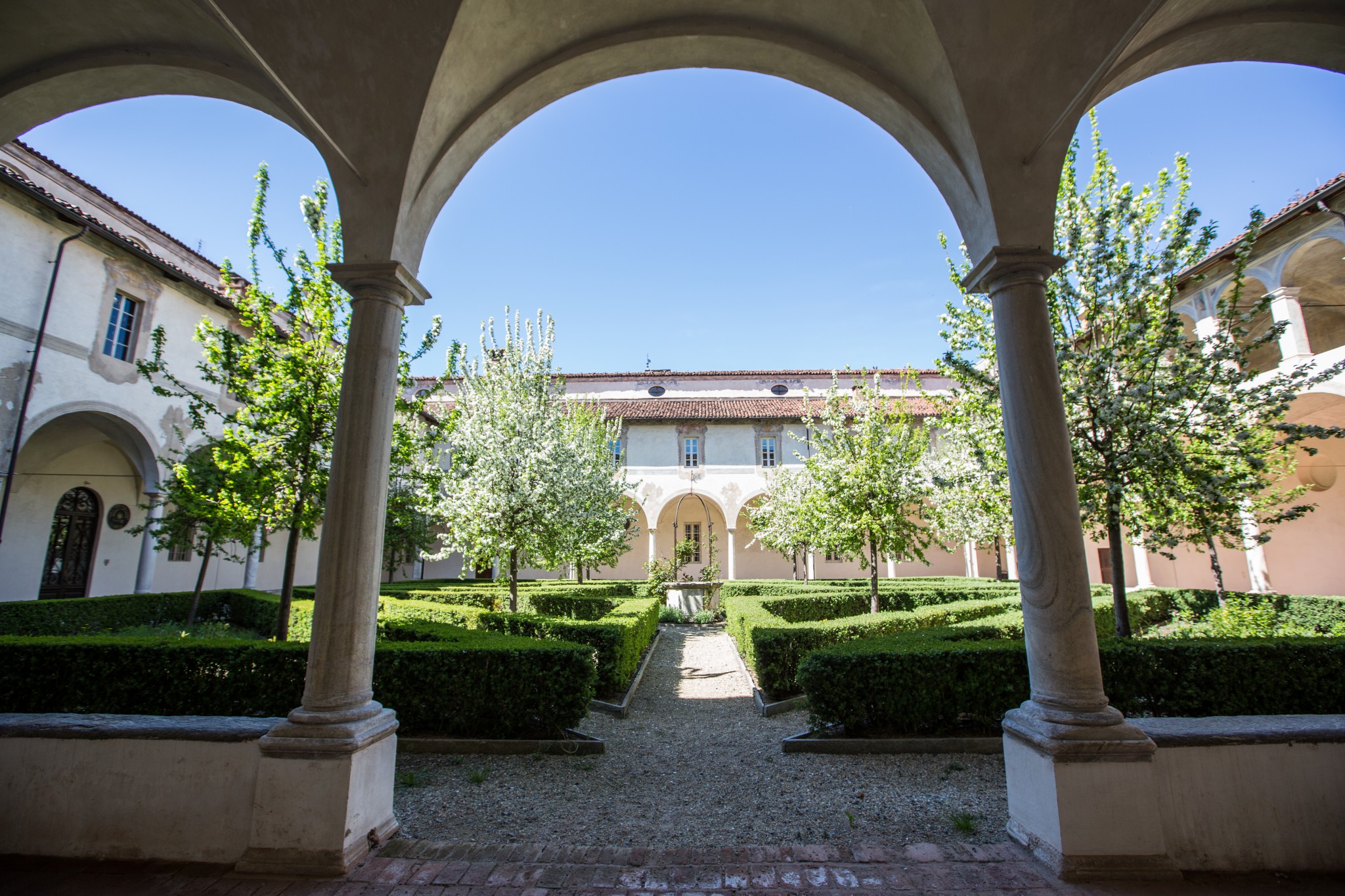 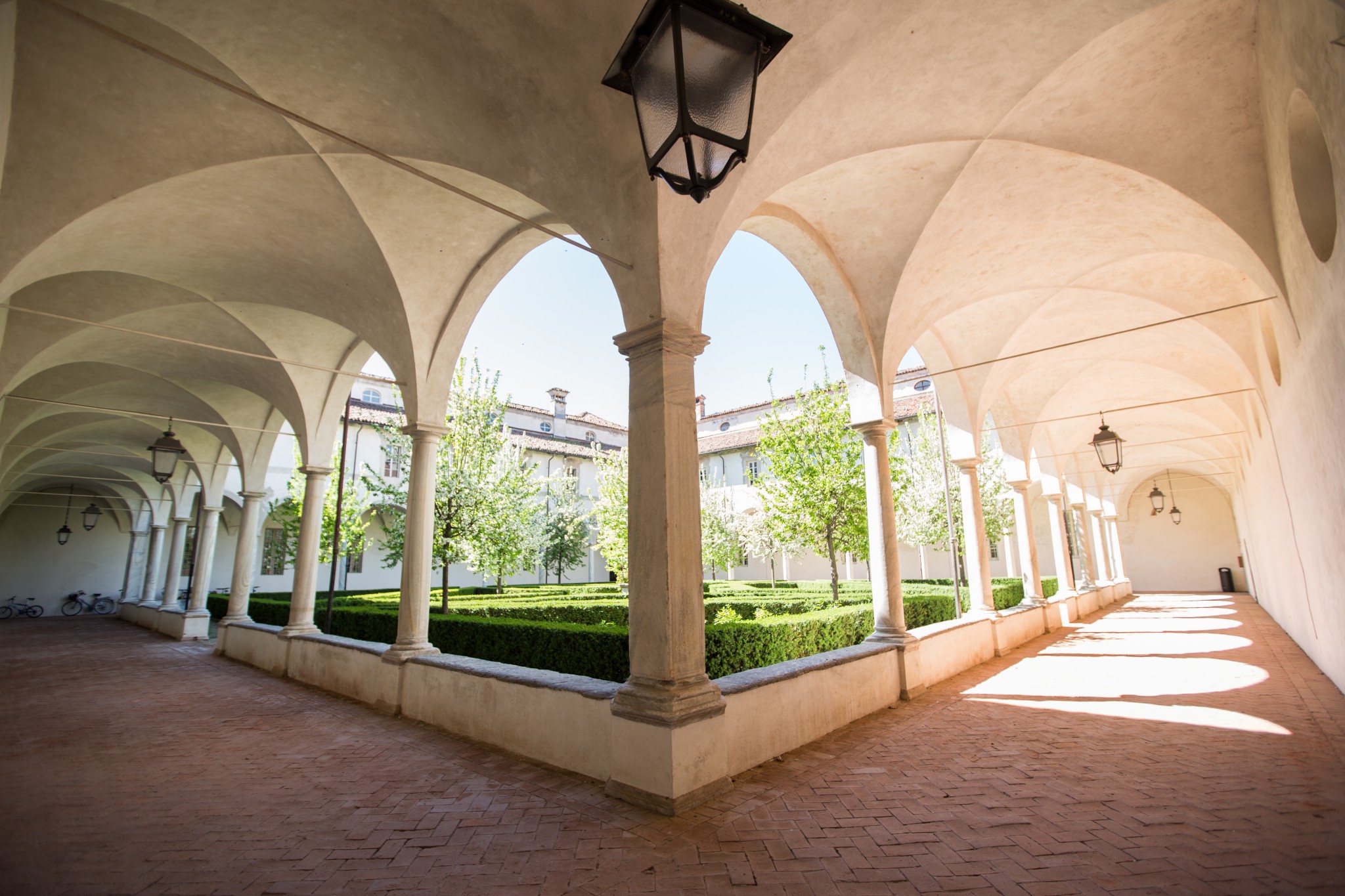 The Church was probably built on the remains of a Roman temple dedicated to the goddess Diana, a theory which seems to have been confirmed in 1822 when a Roman headstone from the first century AD was found there. It became a Benedictine monastery and was an important religious centre for the town, continuing to expand and receiving considerable donations from the nobility of the time, as is recorded in a document from 1028. In the fifteenth century it even became the seat of the Sabauda Univeristy, although the university only remained in Savigliano for a few years this fact reveals the cultural splendour of the town. The building underwent restoration work to restore and extend it on several occasions, the most notable being in 1599, when the architect Ercole Negri di Sanfront transformed the structure considerably. In 1822 restoration work was again carried out which lasted until 1969 with work to consolidate the inside. The most recent work on the church was in 2007 to preserve the façade.
Inside the church are precious treasures, including some canvases and sculptures kept in the side chapel, important frescoes and an exquisite altarpiece in the chancel and choir area.

Baptismal font 1498 As you enter the Church in the first chapel on the left is a precious stone baptismal font dated 1498, with a late-gothic inscription. 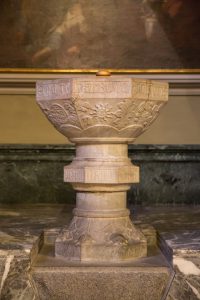 St. Jerome In the third side chapel on the left, dedicated to St. Joseph, there is a fine painting by Giovanni Antonio Molineri of San Gerolamo, it is powerfully realistic, with detailed musculature and an effective use of light and shade. 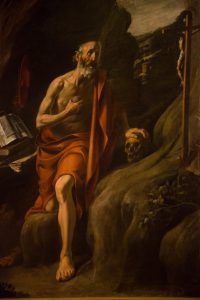 Statue of the dead Christ

Statue of the dead Christ In the side chapel dedicated to the crucifixion, commissioned by the Grassi family, is the canvas of the crucifixion of St. Benedict and St. Lucy, a must in a Benedictine monastery. In the shrine below is a statue of the dead Christ, by the sculptor Carlo Giuseppe Plura, which was originally placed in the Chiesa della Misericordia, also known as the Crusa Nera, and is now kept here. 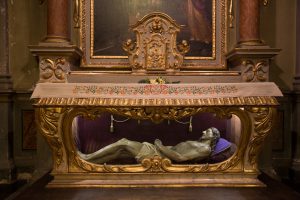 Wooden crucifix Between the chancel and the choir chapel, behind the altar, we can admire the wooden sculpture of the Crucifixion with the Virgin and St. John, by Pietro Botto. 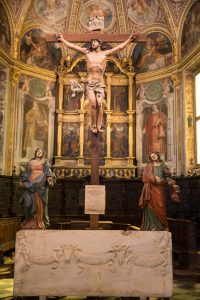 Headstone, first century AD The buildings of the convent of St. Peter are certainly on one of the oldest historical sites in the town. Tradition has it that the Church was built on the remains of a Roman temple dedicated to the goddess Diana, and this theory seems to have been confirmed in the nineteenth century when a Roman headstone dating back to the first century AD was discovered in the foundations of the church. This headstone can now be seen in the chancel of the church. Of large dimensions it is decorated with a banner between two eagles and oxen skulls over which we can see the inscription “L.GAVIUS. C.F. POL.AED. II VIR. QUINQ. GAVIA. L.F. PRIMA FILIA. BUSSENIA. P.F. NEPOTULA UXOR.”, that is “Lucio Gavio, son of Caio of the tribe of Pollia edile, duoviro quinquennale, Gavia first son of Lucio, daughter; Bussena Nepotula, daughter of Publio, wife”. (duoviro quinquennale: a person in charge of the census of the population of the town).

Choir frescoes In 1600 Cesare Arbasia from Saluzzo was called to decorate the ceiling of the choir. He applied his skill to create seven lunettes depicting popes, bishops and Benedictine monks. If you look carefully at the first lunette on your right, below the bishop’s hat in the left-hand corner you can see the date 1607 and the initials C.A, the signature of the artist Cesare Arbasia. 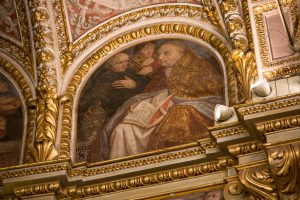 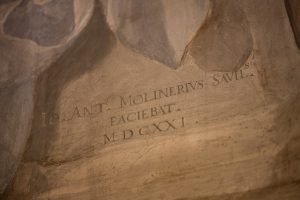 POLYPTYCH OF THE VIRGIN ON THE THRONE

POLYPTYCH OF THE VIRGIN ON THE THRONE Gandolfino da Roreto was called by his brother, a monk at St. Peter’s, to create the polyptych (altarpiece) at the main altar in the Church in 1510. It consists of seven pictures illustrating pairs of saints surrounded by a gilded Renaissance frame. In the centre there is the Virgin on a throne surrounded by angels and cherubim. Above them is a scene of the Ascension on a gold background and on the upper part of the polyptych the Pietà (virgin holding the dead body of Christ) with Christ between Mary and St. John. The refined details of this great altarpiece draw the observer’s attention to the delicate faces, the expression of the Virgin as she gazes at her son, the son of God, and the voluminous robes made precious with gold finishes. 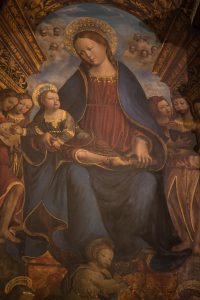 CEILING PAINTINGS The frescoes on the ceiling were created by Domenico Cardellino between 1850 and 1854, and provide a rich decorative display, with gold decorations, rosettes, solomonic semi-columns and festive cherubim. The medallions on the ceiling, which are frescoed between the arches, are fragments of the previous decorations by Cesare Arbasia from the early 1600s and depict Benedictine saints. 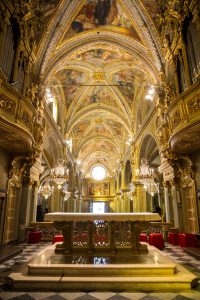 CLOISTER AND BELL TOWER The cloister was already present in the original structure of the convent when it was occupied by the Benedictine monks, but what we see today is the result of renovations carried out in 1621. A place of silence, meditation and prayer, today it is the perfect place to relax in the shade of the colonnades or stroll in the gardens, among the hedges, roses and ornamental apple trees. At the centre of this refined floral geometric design is a seventeenth century granite well softened by a perfumed climbing rose “souvenir de la Malmaison”. The bell tower we see today is the work of Francesco Gallo who rebuilt it between 1722 and 1726 after the original tower collapsed also damaging the Church. On a clear day the tower benefits from stunning views of the town skyline and the mountains that stand out on the horizon with Monviso towering above them, its peak being the symbol of this area. 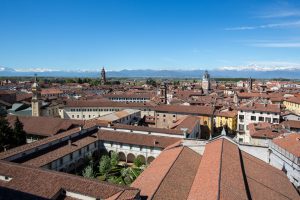