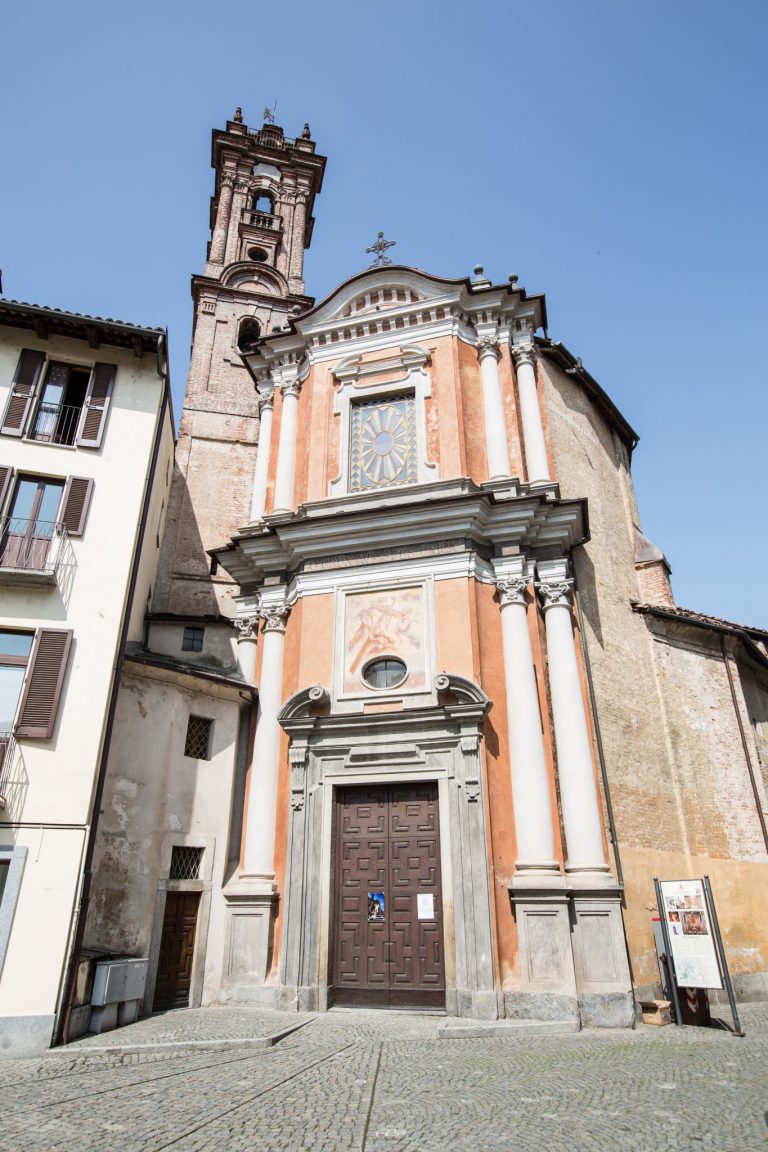 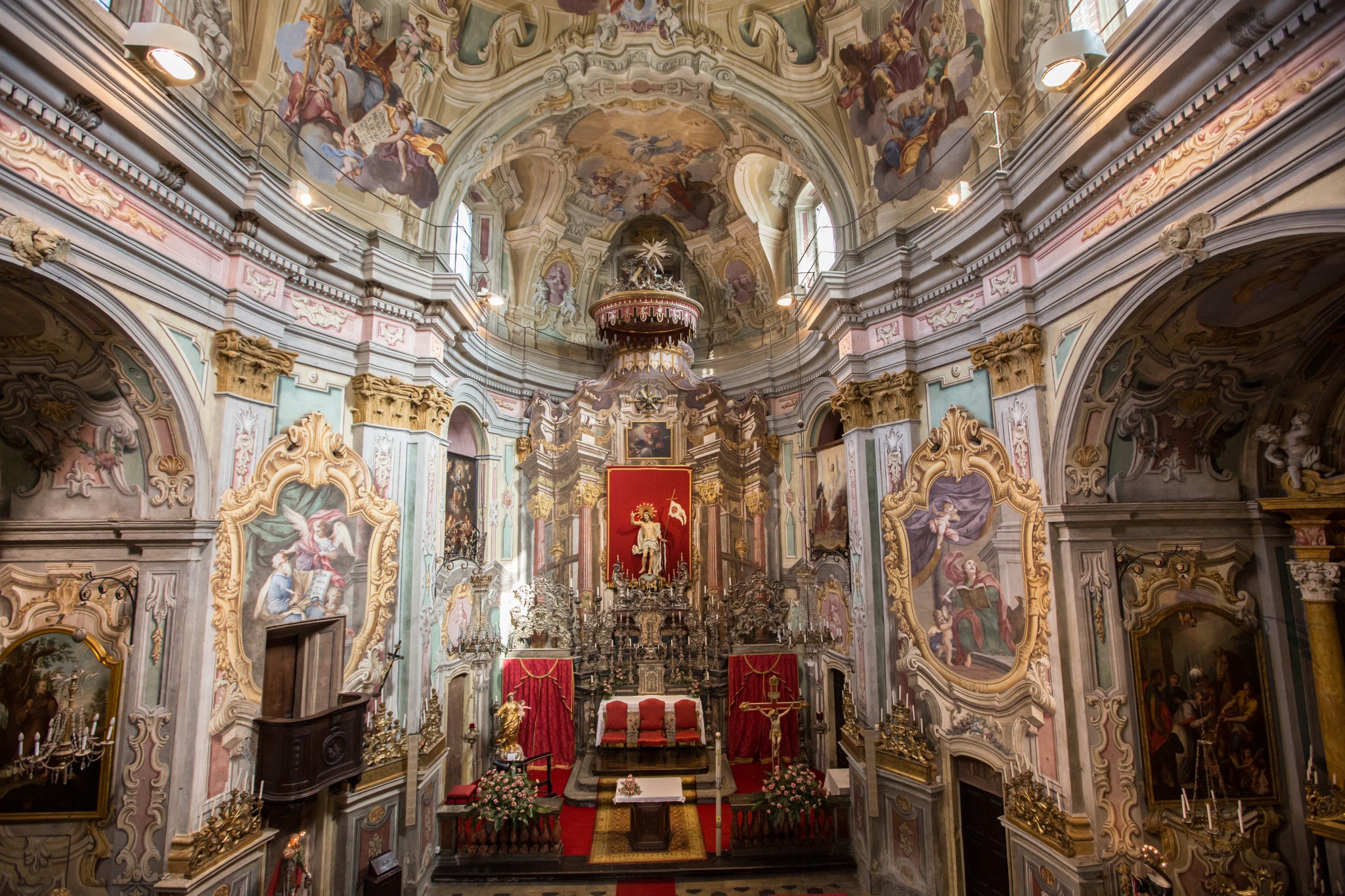 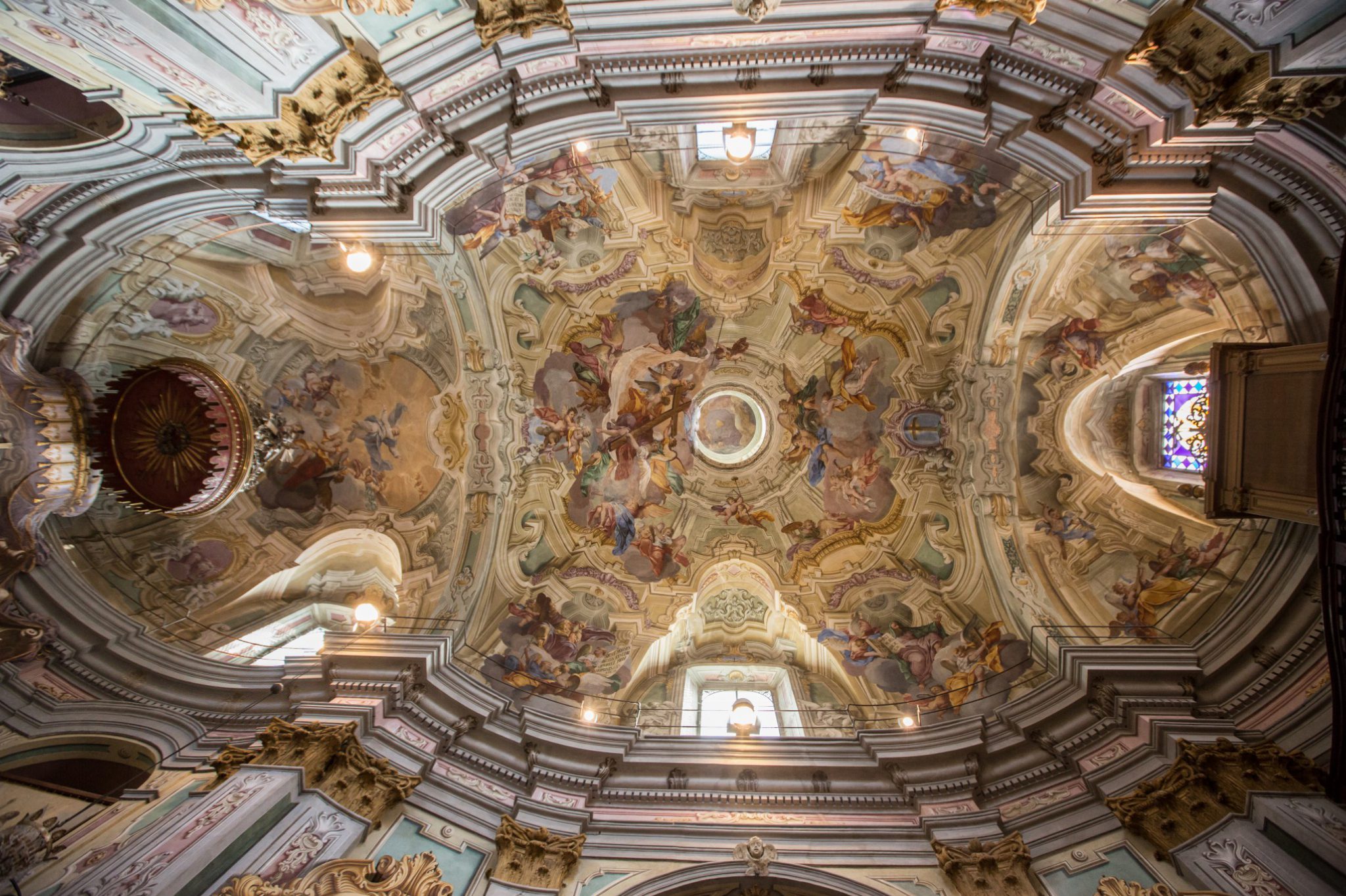 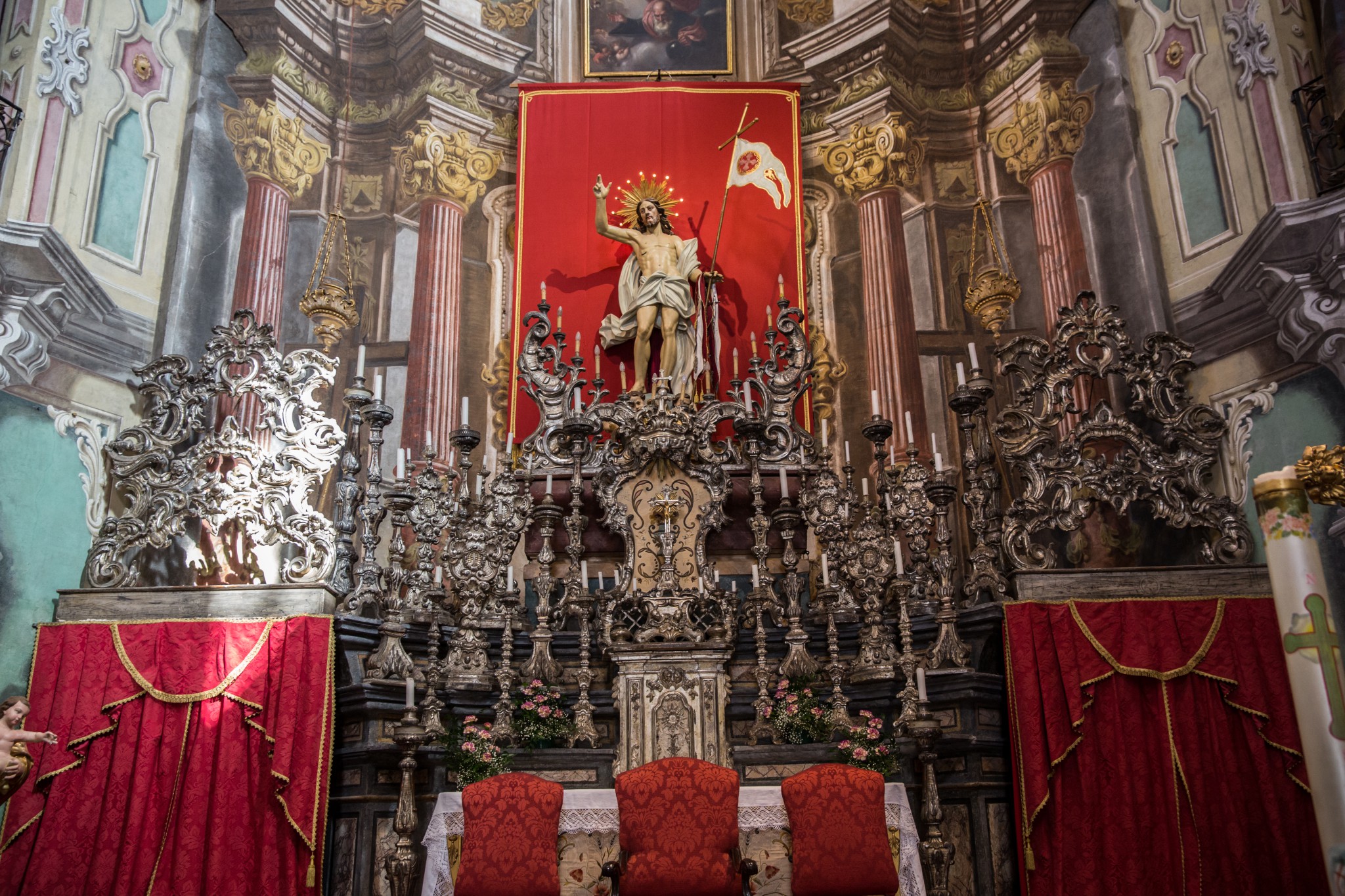 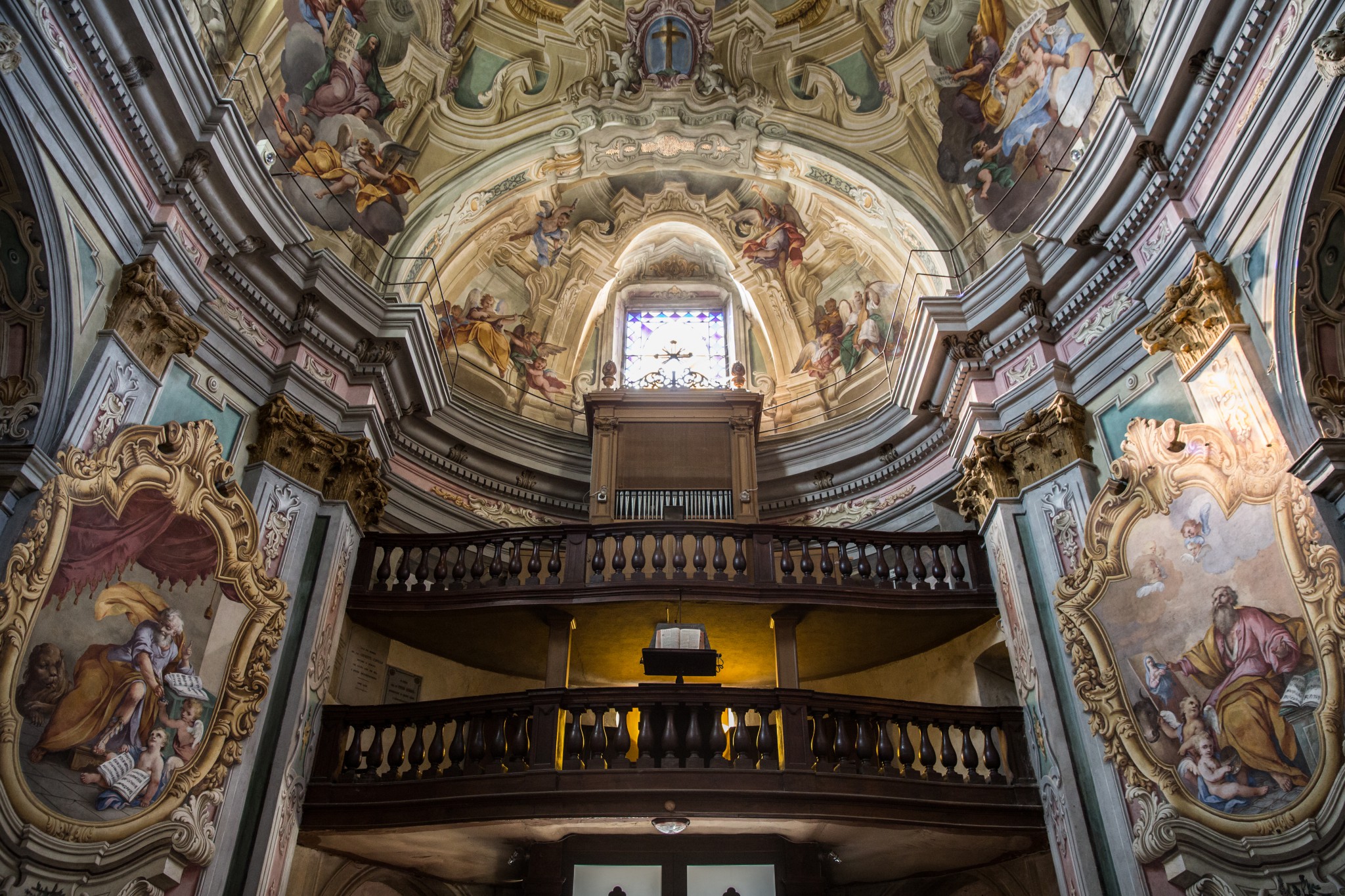 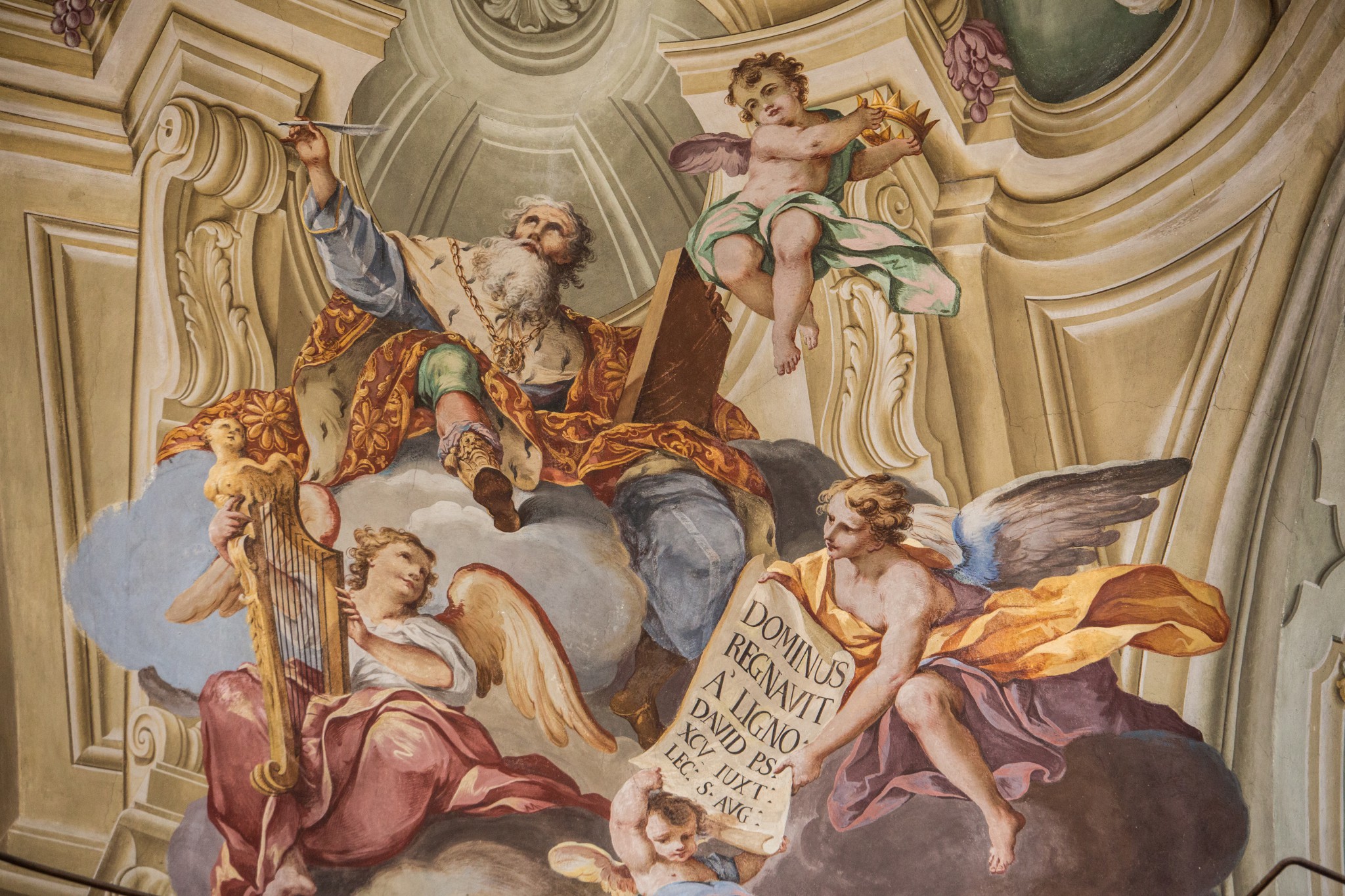 The Confraternita della Pietà (Confraternity of mercy) was established in Savigliano in 1445 with the aim of bringing comfort and help to the poor and needy. The original building was located in a different place from today, in the church that was called Santa Maria del Pianto in the neighbourhood of the Pieve in the “Malborgatto” area. It was completely destroyed in 1640 and the brotherhood was forced to find a new home so the Arciconfraternita della Pietà was created in piazza Cesare Battisti. First the members restored a small existing chapel dedicated to St. Anthony, then commissioned a project for a completely new Church. Built between 1707 and 1722 to designs by Gian Giacomo Plantery, it has a central nave with a 22 metre high dome and stunning interior decoration. The bell tower was added later around 1825. The external facade has two storeys and four columns, above the entrance is the fresco “il Trionfo della Croce” (Triumph of the Cross) created in 1880 by Luigi Molineris.
The vertical structure and corner position of the church are probably due to limits imposed by the restricted space available at the time of construction, since opposite there was the Champeaux building which was knocked down in 1838 to create the piazza we see today.

EASTER PROCESSION This enthralling annual tradition began in 1726. Interrupted from 1970 to 2000, the procession now takes place every year on Easter Sunday thanks to a group of volunteers. The confraternity bearing their standards and accompanied by many figures in costume carry the statues by Plura of Christ resurrected with the Angel and St. Helen through the streets, followed by a crowd of the faithful and the curious. 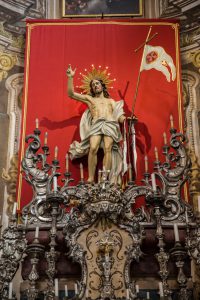 LA PIETA’ BY JEAN CLARET The 1656 painting by Jean Claret is placed at the centre behind the high altar and shows La Pietà (the Virgin Mary holding the dead Christ) with St. Benedict, St. Francis and St. Magdalene. 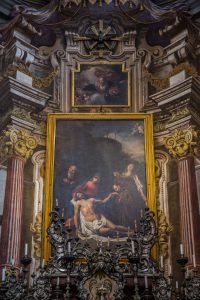 THE STATUES The sculptor Carlo Giuseppe Plura was called to make the statues for the archconfraternity. The statue of Christ Resurrected is dated around 1725, during the Easter Mass the statue is solemnly raised thanks to the original mechanical device kept behind the high altar, and is then carried in a procession through the streets. The Angel and St. Helen are part of the same group of sculptures. In the niche on the right is Our Lady of Sorrows and the Deposition of Christ, a work from 1904 by the company Moja from Turin. 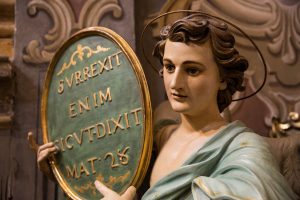 CEILING PAINTINGS The interior of the Church is richly decorated with the precise intent of amazing and enthralling the faithful before the majesty of God. The illusionistic effects and the side chapels were painted by Pietro Beltramelli, while the high altar and the frescoes on the dome were by Giuseppe Pietro Dallamano with the assistance of Michele Antonio Milocco and Francesco Bianco. Easily recognisable in the four lower corners are the four evangelists, Luke with oxen intent on painting the Virgin, Matthew comforted by an angel, John with the eagle and Mark with the lion, above are the prophets Isaiah, David, Moses and Habakkuk. On the ceiling the angels carry the symbols of the passion of Christ: the dice, the crown of thorns, the cross, the stick and the sponge.