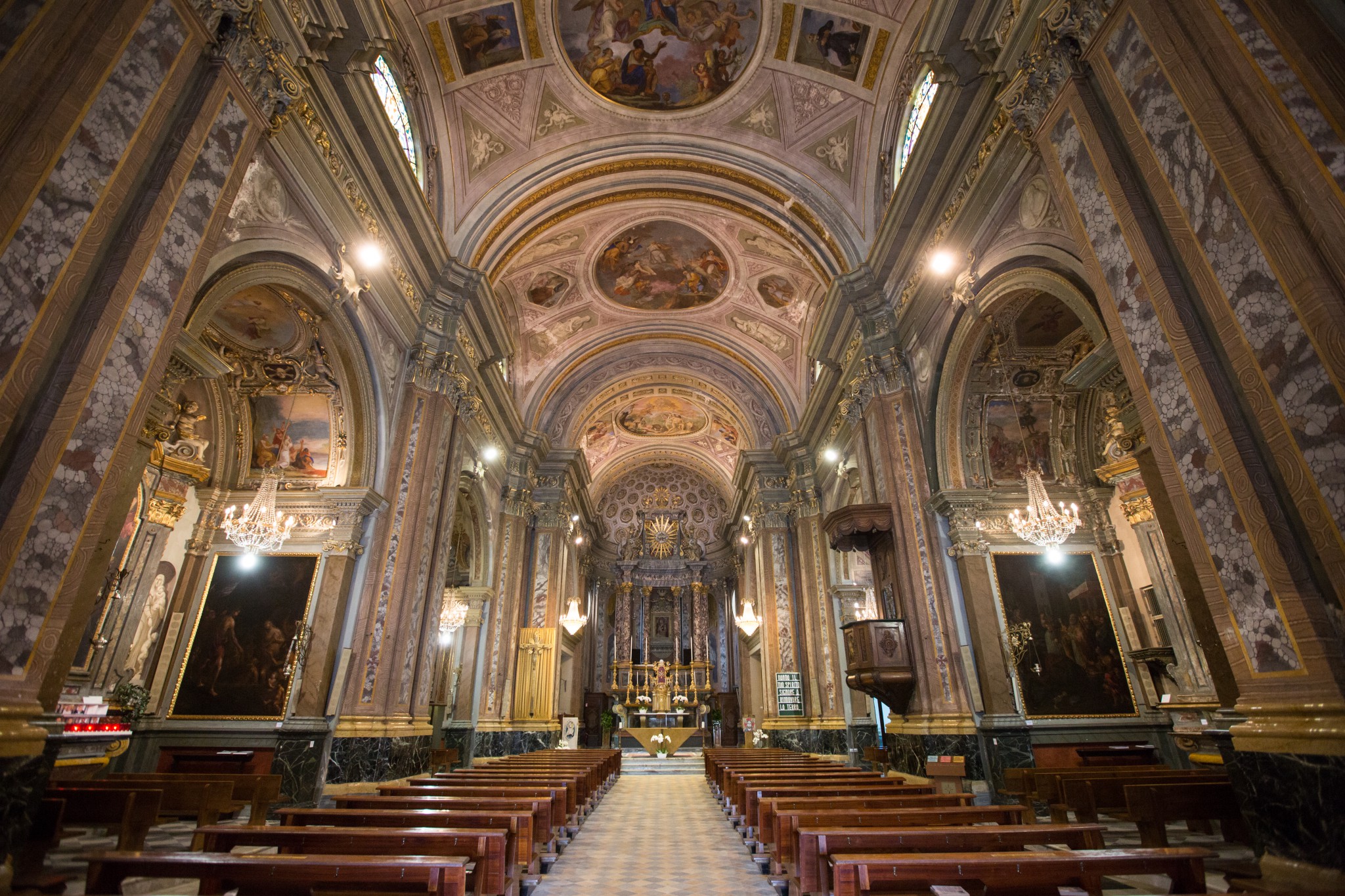 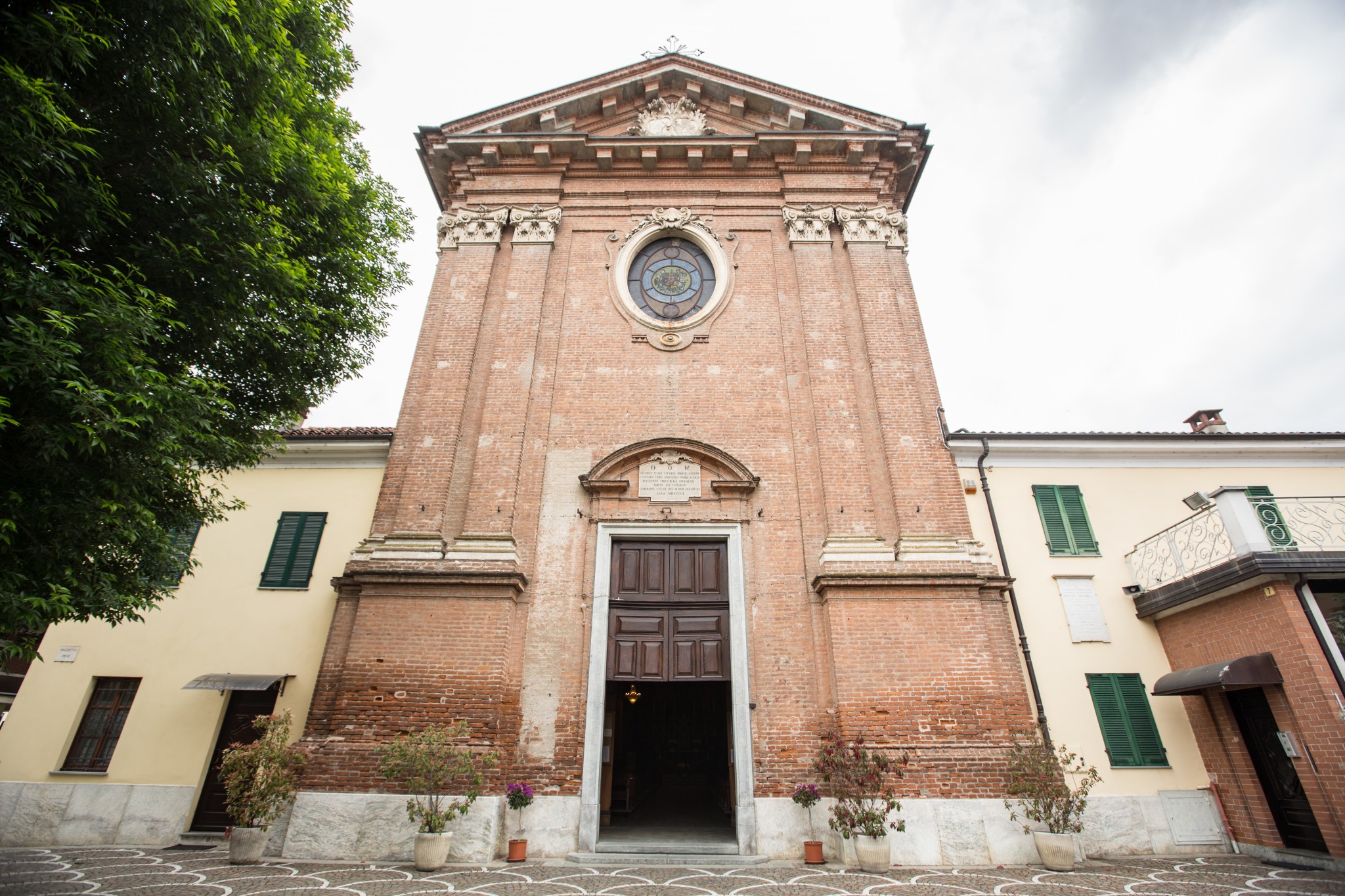 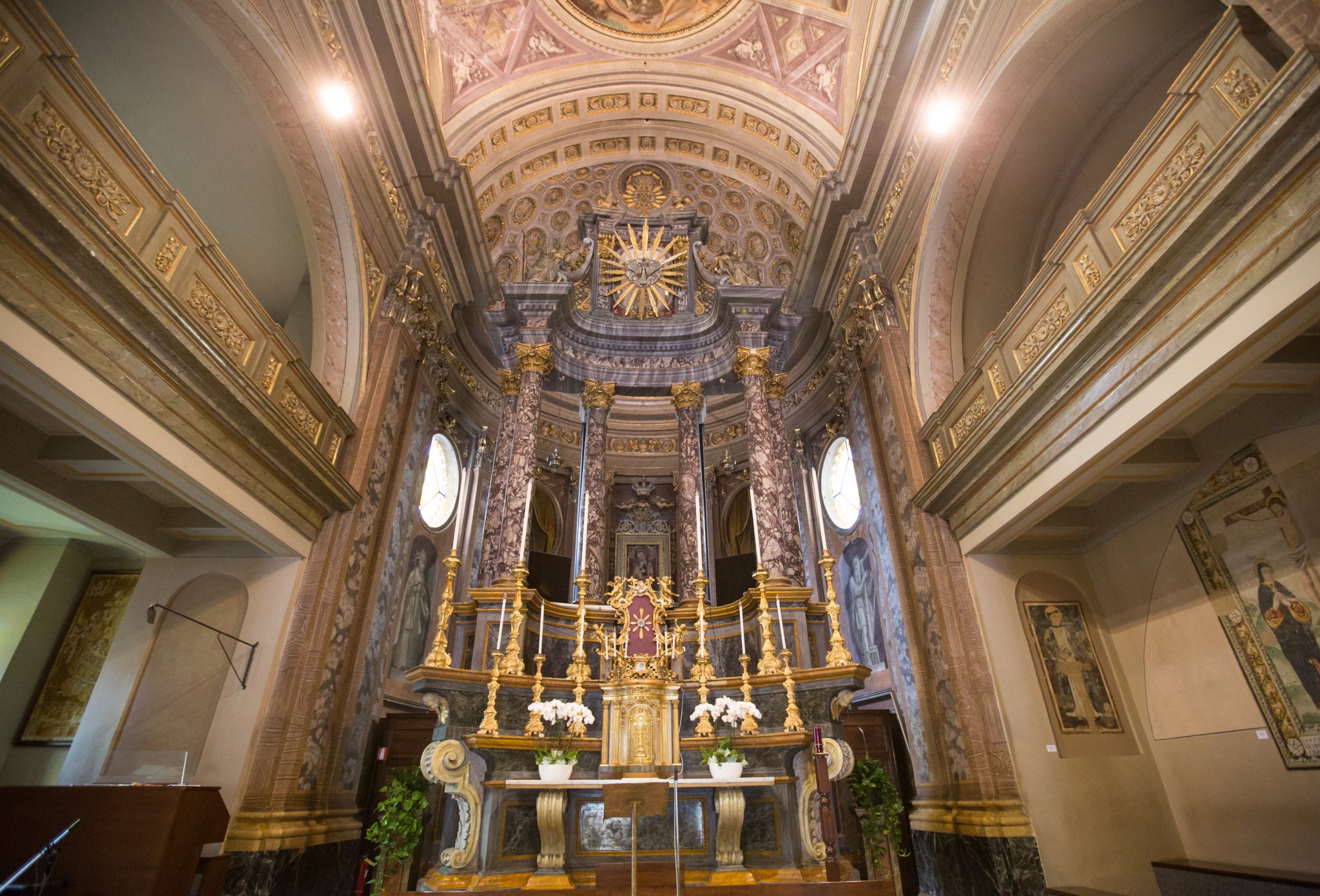 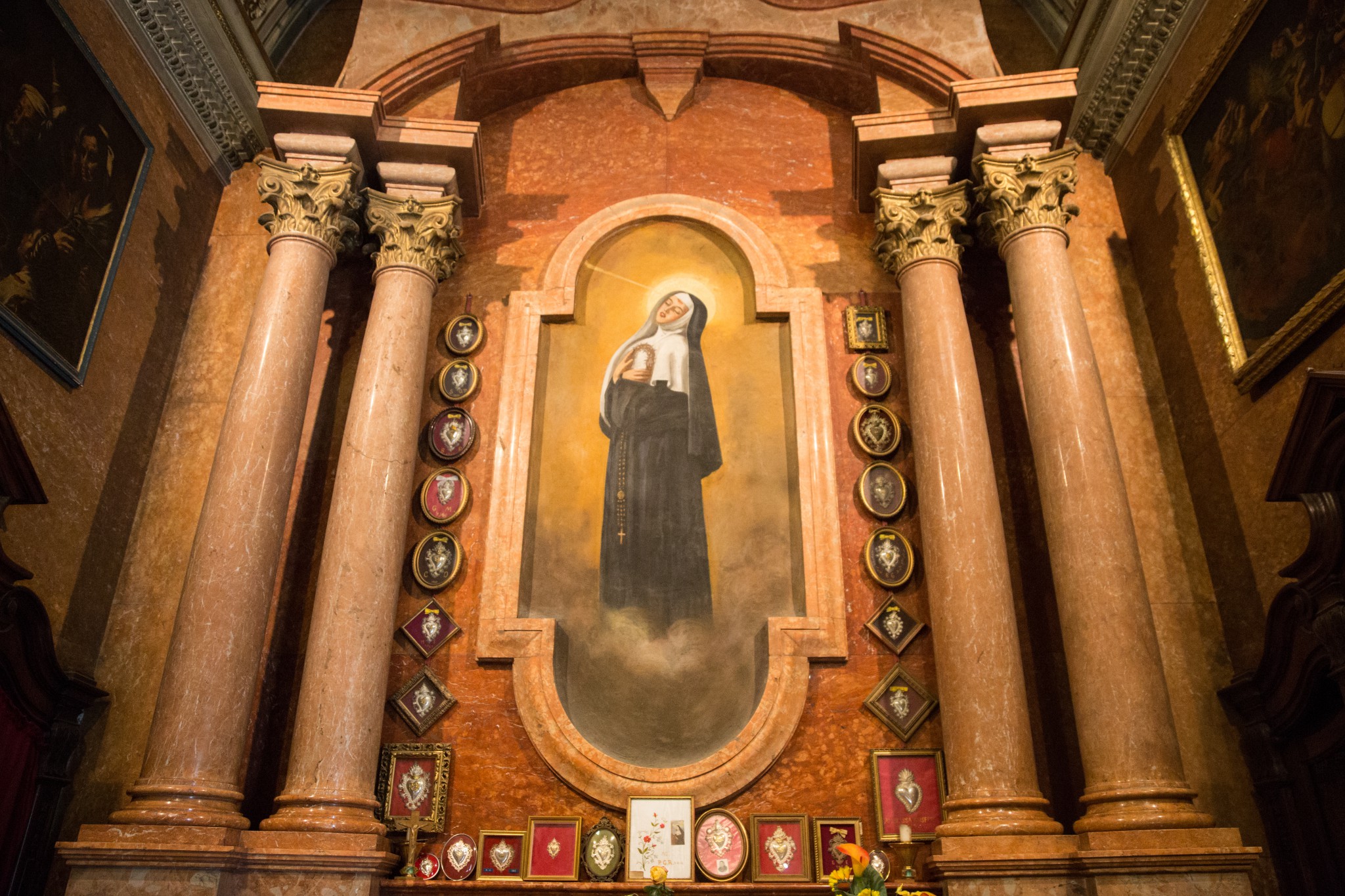 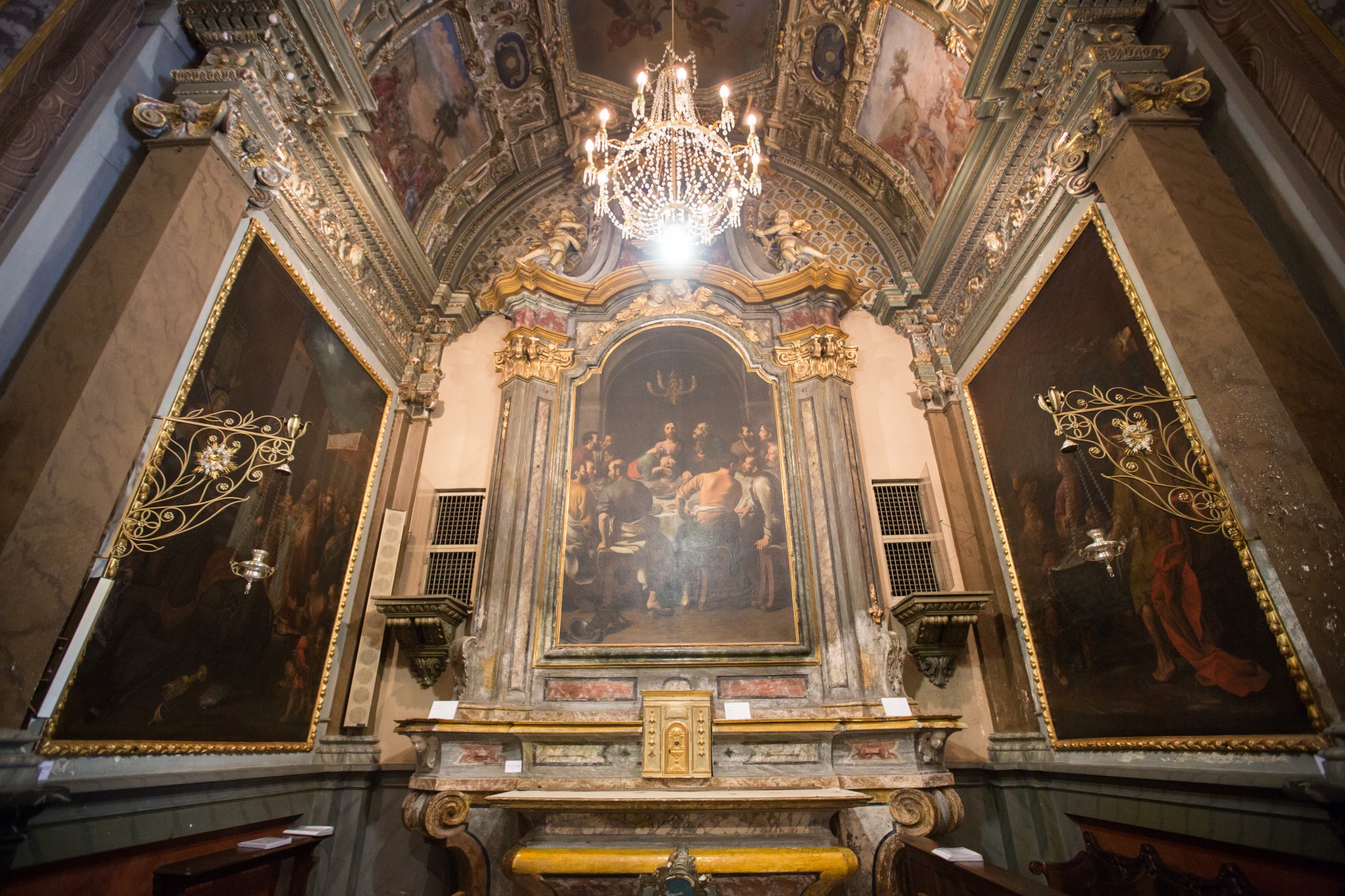 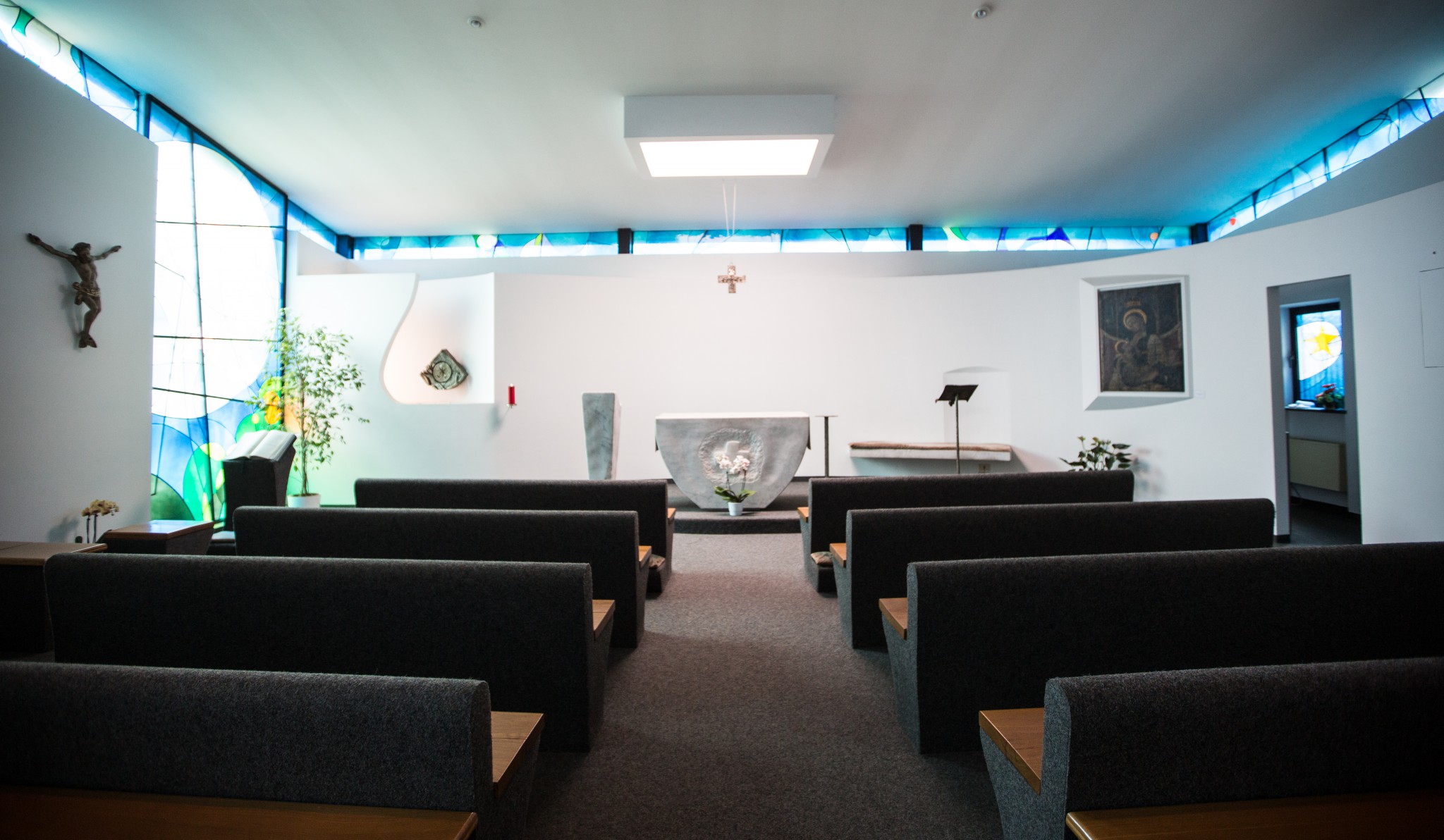 Originally a small parish outside the fortified walls of the town, the Church of St. Mary is probably the oldest parish in Savigliano. Its foundation dates back to the sixth century A.D.
Its history is marked by alternating moments of glory and abandon. Damaged on several occasions it was completely rebuilt in the 15th century, when the direction it faced was changed, but was unfortunately closed in the 18th century due to its evident state of decay. It was finally opened again after undergoing work by the architect Bartolomeo Ricca between 1767 and 1769. Unluckily the chancel was seriously damaged by a fire in 1847, and had to be rebuilt by Maurizio Eula and newly decorated by Domenico Cardellino.
It is currently one of the four parishes in Savigliano, and although it needs restoring, it can easily be defined as a small art gallery. It contains many precious treasures, and visitors will be amazed to find works of art in every corner, even where you least expect it, with frescoes and canvases by the most important artists who worked in the town.
Kept in the church are some 16th century frescoes, which were taken from Santa Croce Church, a small chapel situated in the countryside around five kilometres from the town.

THE BELL TOWER The bell tower was built in 1870 and its small terrace, which gives an excellent panorama above the city, was used as an astronomic observatory by Virginio Schiaparelli, one of the most famous astronomers of the eighteen-hundreds. It was he who designed the two sundials on the outside of the apse. 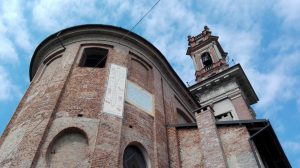 PAINTINGS BY JEAN CLARET Many paintings in this Church are attributed to the Flemish artist Jean Claret. In the side chapels, the winter sacristy, the niches and even in the most improbable corners you can see works by the artist who revolutionized the art scene in Savigliano. Among the best preserved are: la Cena di Emmaus 1677, Miracolo di Torino 1677, La discesa di Cristo al limbo 1670 and La madonna con bambino e donatore. 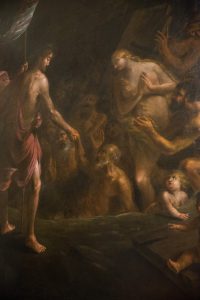 Jesus prays in the garden of Gethsemane

Jesus prays in the garden of Gethsemane Bartolomeo Rusca and Giovanni Antonio Molineri once again worked together to decorate the chapel of Santa Croce. For a time the sepulchral tombstone of the venerable Gudris, a priest who lived in the 7th century A.D, which was found near the country chapel of Santa Croce was kept here. Today it is displayed in the Civic Museum in Savigliano. The painting kept in this chapel is a work from 1627 by Giovanni Antonio Molineri, “ L’orazione di Cristo nell’orto dei Getzemani”. In the foreground we see the sleeping apostles, above them is Jesus, on his knees, with a sad expression, illuminated by the rays of light from the Holy Spirit that fend off the darkness, in the act of accepting God’s will.. “O my Father, if it be possible, let this cup pass from me: nevertheless not as I will, but as thou wilt” (Matthew 26,39) 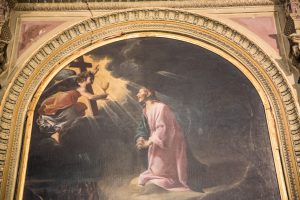 Virgin and Child, St Carlo Borromeo, St Giuseppe In 1615 the town council commissioned Bartolomeo Rusca and Giovanni Antonio Molineri to decorate the altar of San Giuseppe (St. Joseph). Unfortunately the parts in stucco have been lost, but the canvas by Giovanni Antonio Molineri is well preserved, and illustrates the Virgin and Child with San Carlo Borromeo and San Giuseppe. The painting is one of the first works by the artist after his return from his stay in Rome. The figures of San Carlo and San Giuseppe gaze upwards towards Mary, who is surrounded by angels. The child was originally painted nude but was covered with a cloth during a later restoration. In the background the fortified city of Asti is visible. 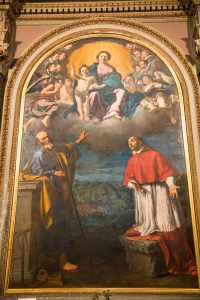 The last Supper In the chapel of Corpus Domini you can admire one of the most touching works by Giovanni Antonio Molineri, L’Ultima Cena, dated 1627. The apostles, seated around the table, are captured in the dynamic moment when Jesus reveals that one of them will betray him, they are portrayed with dismayed expressions in the act of fervidly discussing it with one another. A sleepy Giovanni rests his bent head on Jesus’ chest. In the foreground at the bottom of the painting a cat is licking the leftovers from a plate, lending a touch of intimacy and daily life to the scene. An efficacious use of colour, light and shadow highlights the faces, the musculature of the bodies and curious details such as the plates or the shoes worn by the apostles. 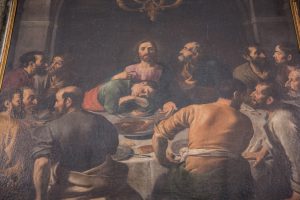 Crucifixion and saints In the chancel area, in a niche on the right are some fragments of frescoes coming from the Church of Santa Croce, located outside the town. A crucifixion with a large gap, in which we can unfortunately only imagine the figure of St. John, St. Michael Archangel in his refined robes beneath whose feet we can see the date of creation 1564 and finally St. Bernard of Mentone. 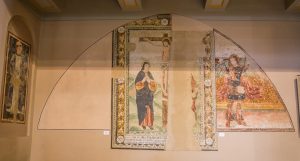 16th Century Frescoes In the first chapel on the left as you enter, are some 16th century frescoes by an unknown author, illustrating different saints. On one side St. Barbara, with the common attribute of the tower and the martyr’s palm in her hand, St. Catherine of Alexandria with the wheel and St. Lucy with a plate in her hand containing eyes, as she is the protector of sight. On the other side between the gothic arches and classic columns you can recognise St. John, St. Lucy and St. Anthony the Great with his customary bell in his hand. 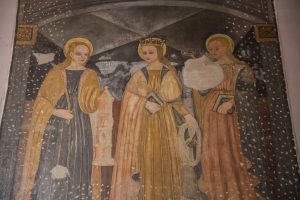 The White Virgin SAt the main altar is a 14th century fresco of the White Virgin. It pictures the Madonna breastfeeding, a widespread theme in the Cuneo area. The Madonna looks towards the observer, holding baby Jesus in her arms as he suckles his mother’s milk and gazes up at her. The name the White Virgin comes from the white mantel wrapped around the Virgin, enriched with fine floral decorations. 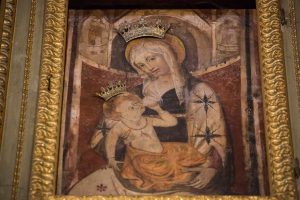