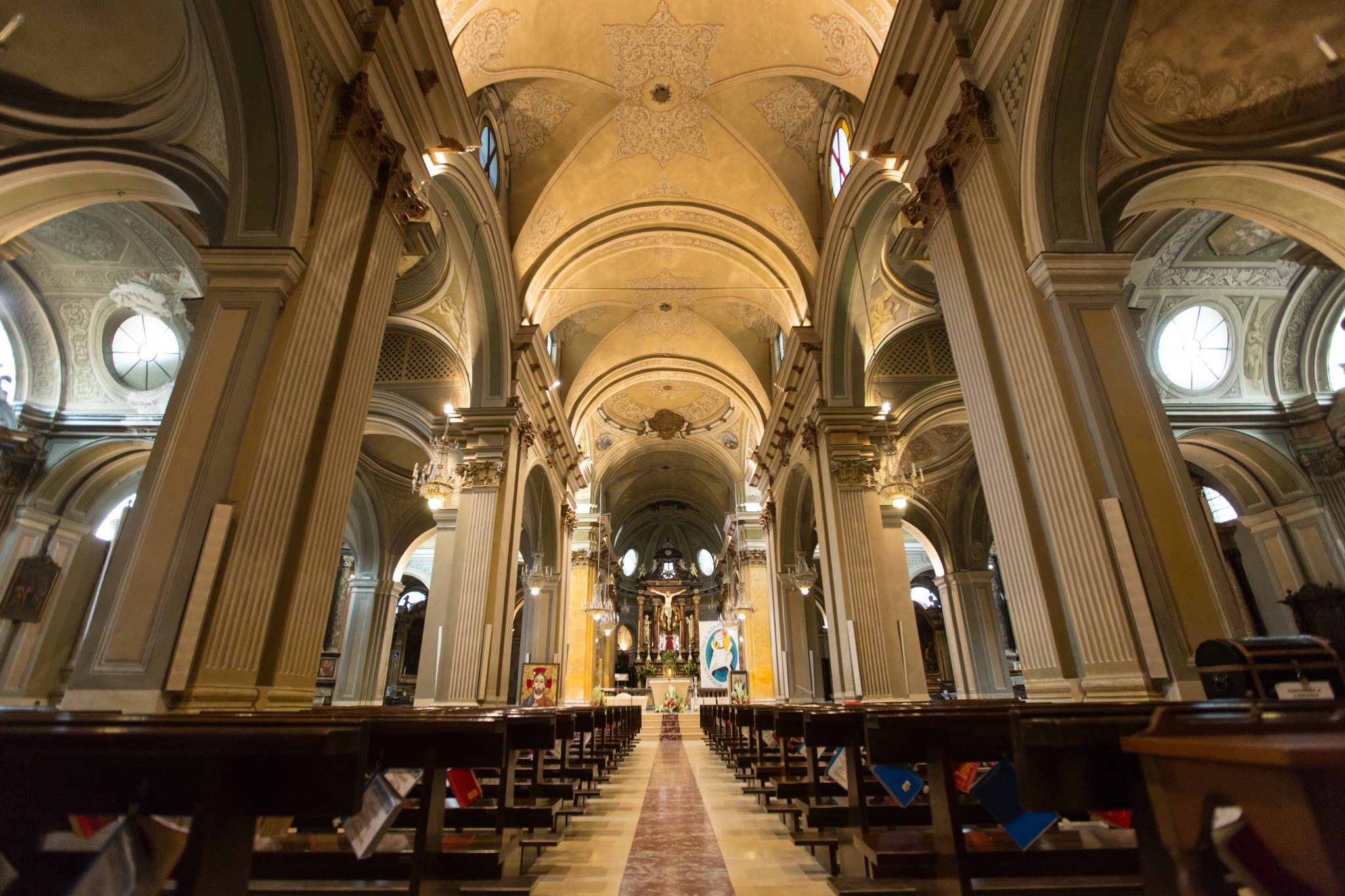 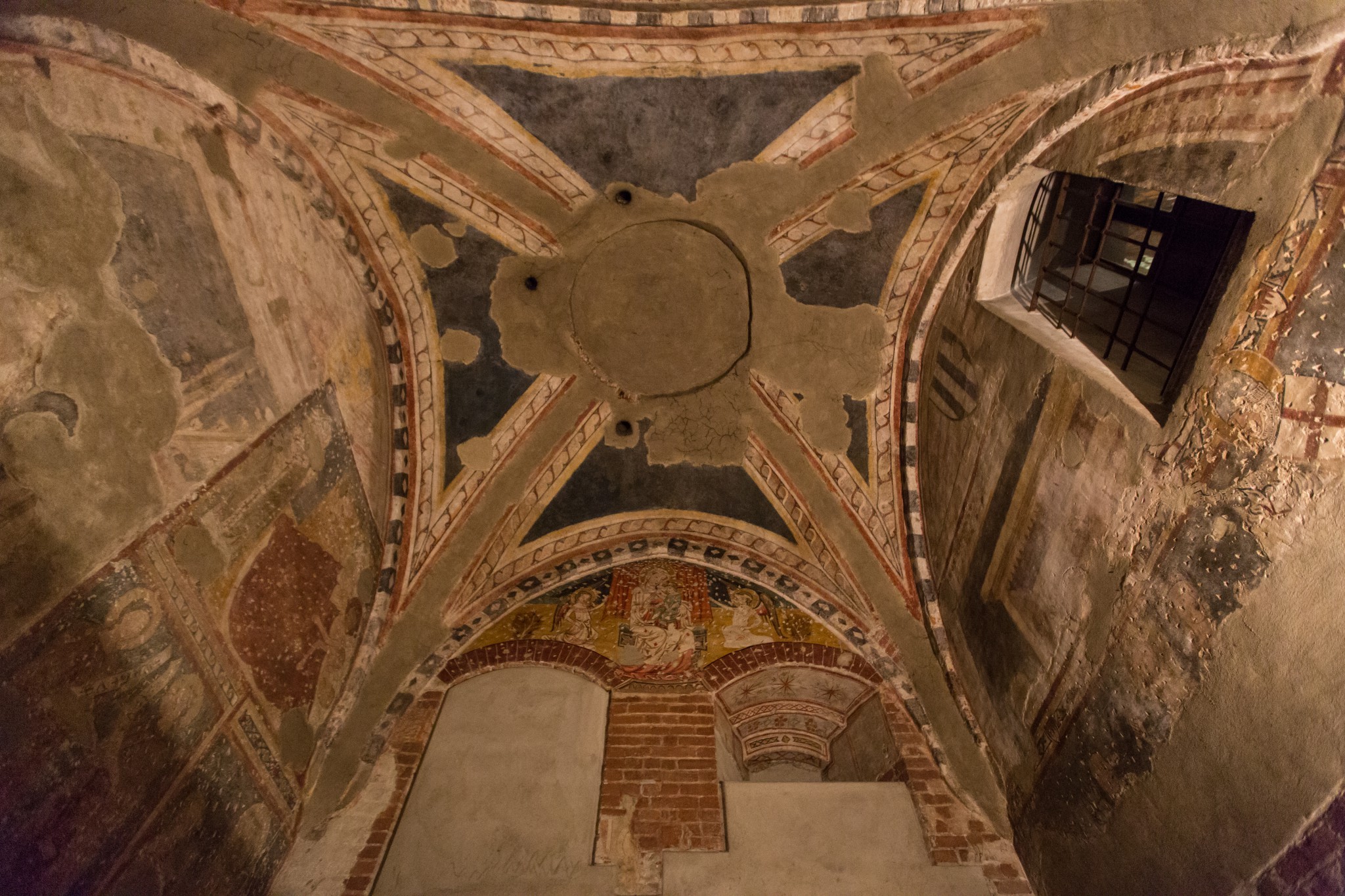 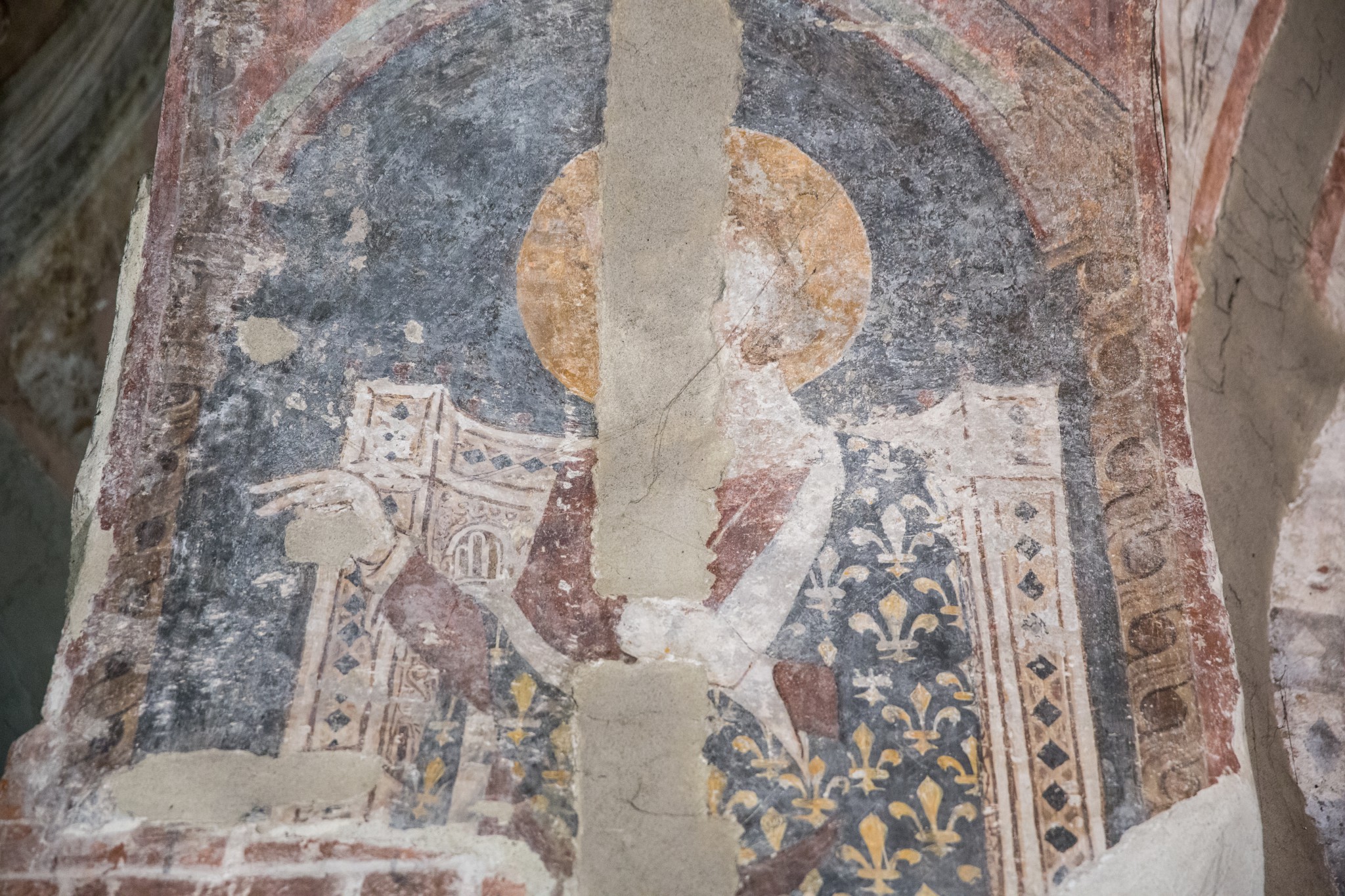 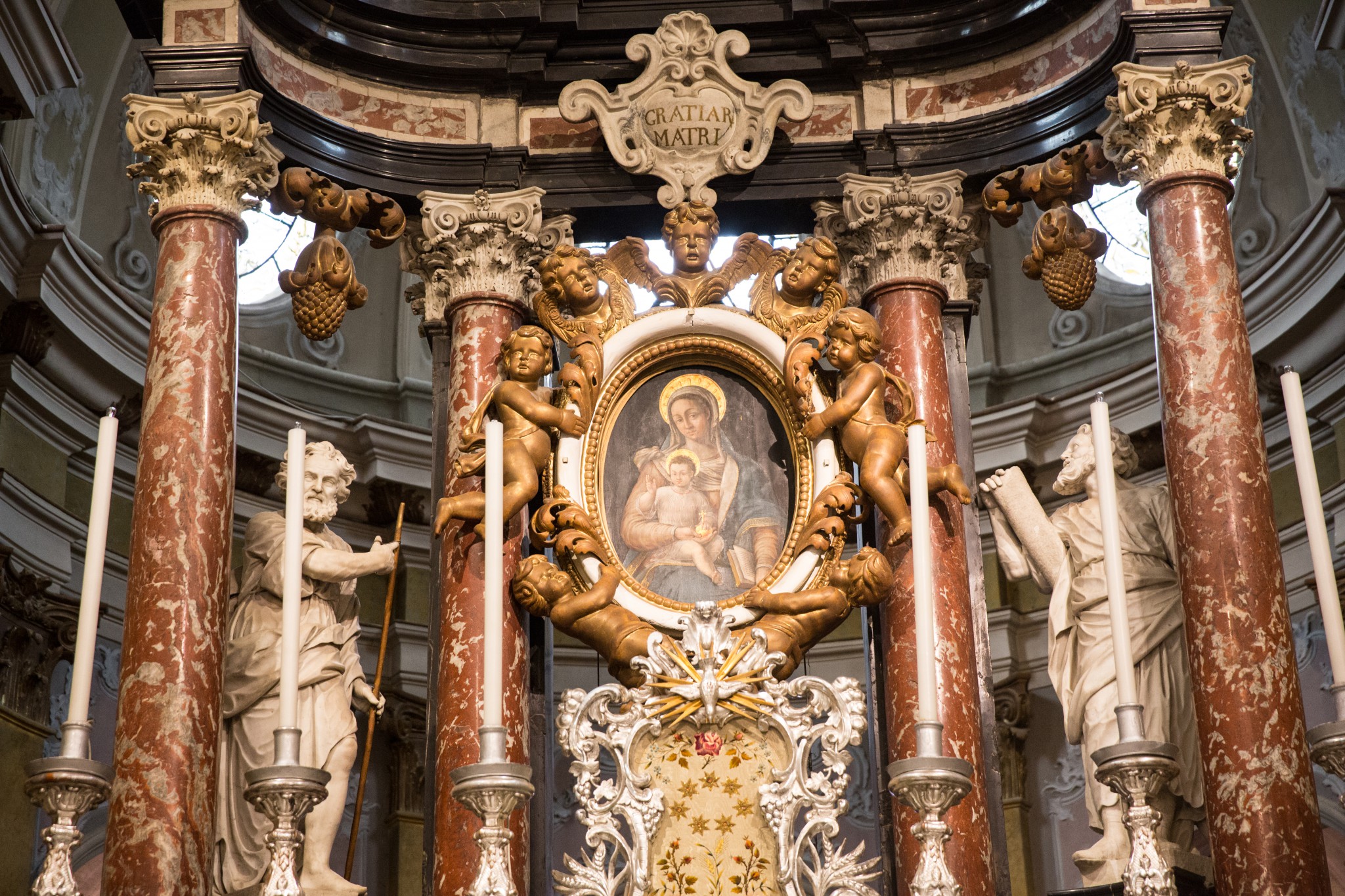 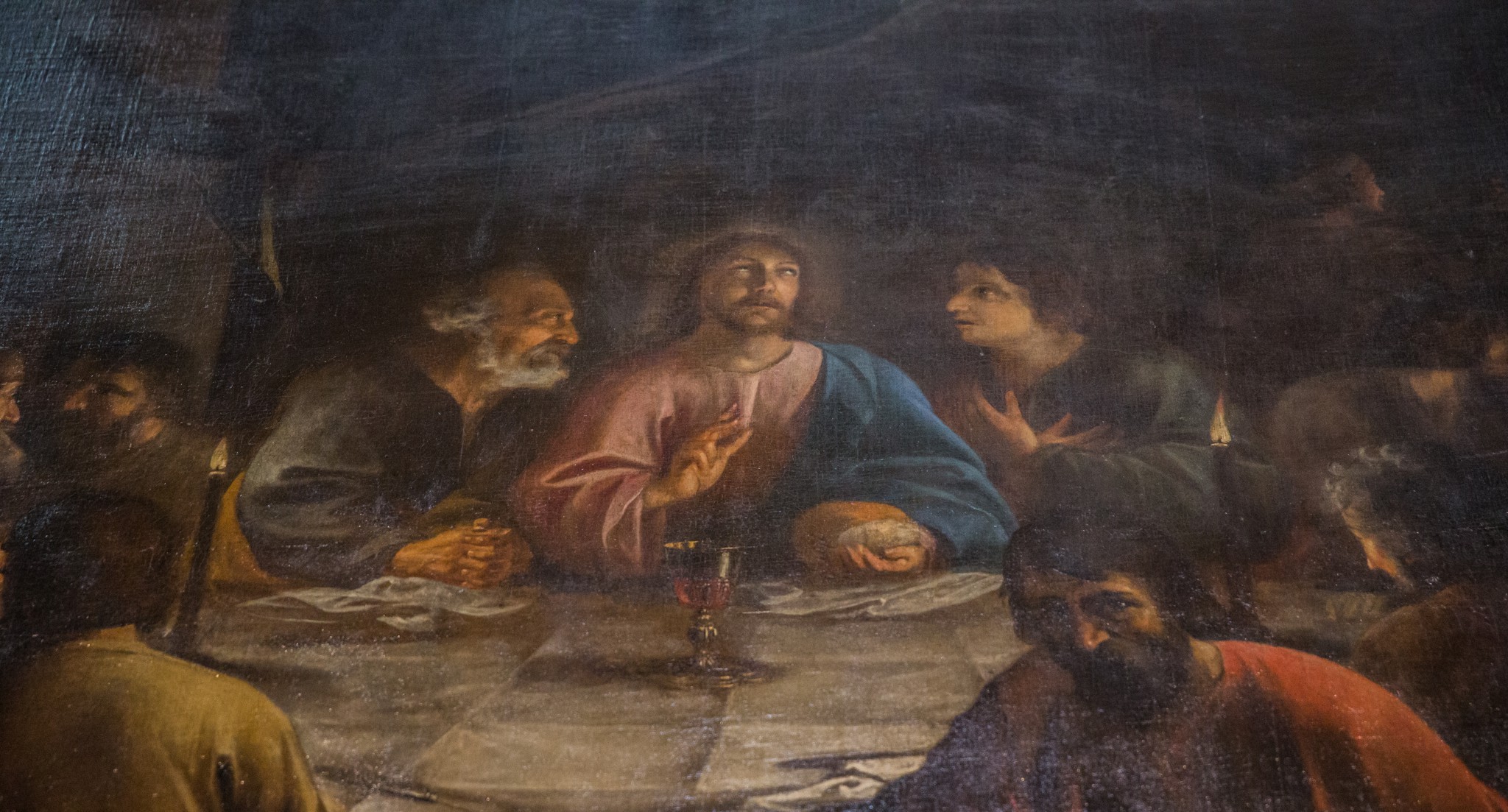 The building of the church of St. Andrew has an unusual story. Initially the structure of the church was actually facing in the opposite direction to what we see today. For strategic reasons the urban plan of the town placed via Miretti as the main road since it passed in front of the town hall, and the original entrance to the church was here. However, due to the fact that it was too near to the defensive walls of the town and the construction of the arco di trionfo in honour of Carlo Emanuele I, the urban plan was changed; what is now Via sant’Andrea was created, along with the neighbourhood associated with the nobility, making it necessary to turn the church around. The new façade was created where the apse used to be and the old facade was turned into the new apse. This is why there is a bell tower on the façade rather than at the back of the church.
The first records of the Church date back to the twelfth century, but it has undergone many restoration and renovation schemes, the most recent being in 2008 when the whole of the inner floor was renovated. The church is certainly striking for its majesty, in the form of a Latin cross with five naves. 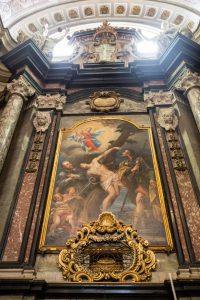 The Last Supper The marble altar of the Società del Santissimo Corpo di Cristo is located in the nave on the left, above which there is a fine painting from 1663 by Jean Claret, L’Ultima Cena (The Last Supper). 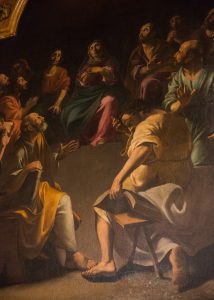 St. Francis receiving the stigmata Above the door to the presbytery, located in the right hand nave towards the apse, is a work by Giovanni Antonio Molineri, “San Francesco riceve le stigmate”. (St. Francis receives his stigmata) 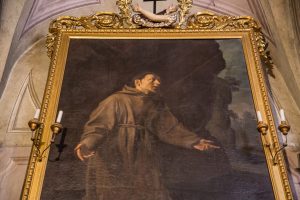 Madonna and child At the beginning of the 1700s the chancel area of the Church became a point of renewed interest. At this time the main altar was created by Giovanni Valla and Pietro Casasopra, with red marble columns, crowning elements in black and the two statues of St. Joseph and St. Andrew in white marble from Carrara. The Madonna and child painted by Giovanni Angelo Dolce was placed at the centre. 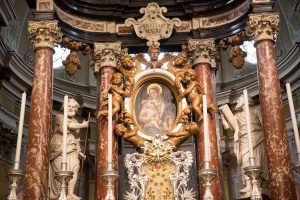 Altar of St. Joseph Its position in what was considered the wealthiest neighbourhood meant the church received considerable donations. An example of this is the help given by Isabella Savoia Carignano, nicknamed the mademoiselle of Savigliano, to build the altar of St. Joseph. It was created between 1728 and 1733 by the famous Filippo Juvarra, an architect trusted by the Savoy court, who designed many prestigious buildings in Turin, including the stunning hunting residence at Stupinigi. 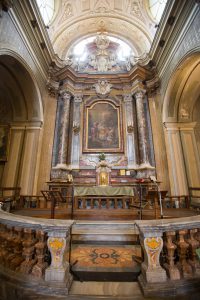 Chapel of St. Nicholas Work to restore the chapel in the 1970s led to a series of surprises, including the discovery of an important cycle of frescoes that were previously covered by a Crucifixion, now placed in the sacristy. The chapel of St. Nicholas is unique in Piedmont, making the Church of St. Andrew even more precious. The cycle of frescoes from 1200 shows a Madonna on the throne with a child and angels and illustrates the story of the life of St. Nicholas. The frescoes are the oldest and most important in the town, and although they are damaged, under the left arch at the chapel entrance we can recognise the figure of St. Christopher and St. Carlo Magno, whose crown, blue cloak with the French fleur-de-lis and his right hand inclined towards the ground as if he had dropped something are easily distinguishable. Carlo Magno is often depicted in the act of offering his glove, a symbol of friendship or alliance, and in this case he represents the cultural and pictorial influence of nearby France, as well as the political impact of the submission of Savigliano in 1259 to Charles of Anjou, welcomed to the city as the “new Carlo Magno, liberator of the Church.” 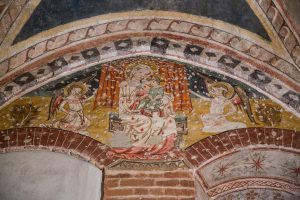