Savigliano has over 21.000 inhabitants and is situated at the centre of the Cuneo plain, in the southern part of Piedmont., it is located between the rivers Maira, Mellea and Varaita which have influenced the town’s development over the centuries. 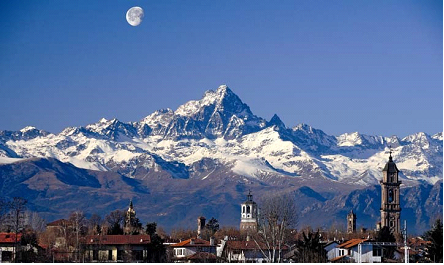 The town, which was first mentioned in an official document dated 18 August 981, had by the XIII century become one of the most important free municipalities in Piedmont. In the following centuries, having passed under the dominion of the Angioni, Acaia and Savoia families, it held a major role in Piedmont history: it became an important agricultural and cultural centre, a thriving commercial town and strategic military stronghold, it was also the seat of the only Piedmont university from 1434 to 1436. The beautiful homes of the local nobility became a top destination for holidays and long stays for the Dukes of Savoia, to the point that in the eighteenth century the princess Isabella of Savoia Carignano moved her whole court here, becoming a patron for local activity. The architectural and artistic importance of the town is notable, reaching its peak with the flourishing “scuola Saviglianese”, one of the highest expressions of seventeenth century Baroque in Piedmont, led by the painter Giovanni Antonio Molineri. Towards the end of the nineteenth century the Saviglianese Santorre di Santa Rosa became famous for his ideals on freedom, which were the foundations for the Italian Risorgimento.

On 16 March 1853 the first section of Piedmont railway was opened, which terminated in Savigliano and in 1880 the Società Nazionale Officine Savigliano, began its activity as an industry specialised in producing rolling equipment, this then became Fiat Ferroviaria (railways) and is today Alstom, world-famous for manufacturing the “Pendolino” (tilting train) and high speed trains.

Today the town of Savigliano is an important centre for agriculture, industry and services in lower Piedmont, it boasts good rail links to Cuneo, Turin and Liguria, and is located just a short distance from the A6 Turin-Savona motorway, and within easy reach of the Cuneo-Levaldigi airport.

Savigliano, has a good hospital and offers its citizens numerous sports facilities (swimming pools, football pitches, an athletics track, sports hall, tennis courts and bocce club (similar to bowls), quality cultural services (Historical archives, Municipal library), a historic theatre with an excellent seasonal programme, some good museums (the Civic Museum “A. Olmo” with the Gipsoteca “D. Calandra” ) and the Museo Ferroviario Piemontese (railway museum). There are schools for every level of education including a branch of the University of Turin with faculties for Educational Sciences and Pharmacy, with a course on Herbal Techniques. Besides this Savigliano is also a centre for the European course in industrial design (CEMI) promoted by Giugiaro and a University of the Third Age run by the local council that offers around a hundred courses every year for a current number of over 800 enrolled members.

Monasterolo di Savigliano has around  1377 inhabitants, called  Monasterolesi,  and is situated at the centre of the Cuneo plain, in south Piedmont bordered by the Varaita brook. The village centre is 291 metres above sea level. Since 1998 Monasterolo has been  twinned with the Texas city of Duncanville. The first historical reports of Monasterolo date back to a document from 907, published at the end of the eighteenth century, by Girolamo Tiraboschi in “Storia dell’augusta badia di S. Silvestro di Nonantola”, which reads   “… capella fundata in onore sancti Silvestri iuris ipsius monasterii, qui est posita in loco e fundo Monesteriolo, seu cafis …”. 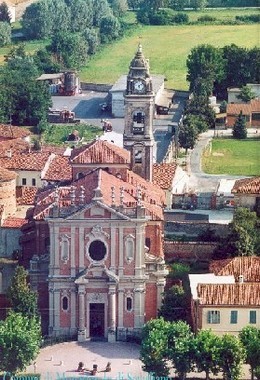 Around this monastery in the early eleventh century a small village formed called  Monesteriolo-Monastayrolium-Monastejrolium, hence the name Monasterolo. The construction of the first defensive buildings in Monasterolo, including the fortress, date back to the times of the marquises Raimondo and Ottone di Busca, forefathers of the Busca families of Langhe and of Rossana. The difficulties that upset the Savoy state from 1347 to 1363, led to the destruction of all the fortified buildings that had been erected in Monasterolo in the first decades of the thirteenth century. Between 1350 and 1356 the village of Monasterolo succeeded in becoming a separate community from the town of Savigliano. The construction of the fortified manor, still the symbol of the city today, and the walls surrounding the village, which were still recorded in the eighteenth century, date back to 1363-1378 and were commissioned by the marquis of Saluzzo. From the 1400s to the 1700s the manor underwent various renovations to meet the needs of the inhabitants. In 1926 the medieval municipal tower with its “bell and clock”, situated to the side of one of the old entrances to the building was demolished. Today the ‘castle’ belongs to the local council, who bought it on 3 January 1928, from the Countess Maria Solaro di Monasterolo. In the area, buildings of note include: the actual Parish church dedicated to St Peter and St Paul,  which was inaugurated in 1904 and the Church of the Confraternita which dates back to 1740-‘47. Moreover there are several chapels and historical houses (of particular interest is Villa Fontana). During the nineteenth and the first half of the twentieth century, despite the difficulties caused by the war of Independence and the two world wars, several works of public importance were achieved and important services were set up which contributed to the gradual improvement in living standards for the local public. Worthy of note are the new drainage ditches, the reclamation of many areas of land, the introduction of fertilizers and agricultural machinery, the construction of the aqueduct and sewage system, the improvement of the roads and passenger transport links with the towns of Savigliano, Saluzzo and Cavallermaggiore. The local nursery school was founded and there is also a local state primary school. 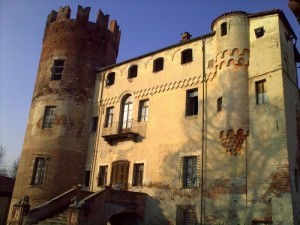 Furthermore, citizens in Monasterolo di Savigliano can enjoy the public library, and sports facilities including two football pitches, a  five-a-side pitch, a tennis court and a sports centre. There are also several shops, three cafés and a restaurant, a chemist’s and two medical practices.

From 1980 to 2000, Monasterolo was at the centre of extensive building development which encouraged many craftsmen and industries to settle there; this led to a radical transformation of the local economy, which was no longer exclusively linked to agriculture but to several well-established and financially solid manufacturing companies. This was  possible not only thanks to the dynamism and hard work of the Monasterolesi but also to the active local public administration that took prompt advantage of the urban planning measures set out by the Piedmont region.

Monasterolo di Savigliano has rail links to Cuneo, Turin and Liguria (leaving from nearby Cavallermaggiore and Savigliano); it is situated a short distance from the A6 Turin-Savona motorway and Cuneo-Levaldigi airport.

Genola is a village with a population of 2,528 people in the Cuneo area of southern Piedmont. It is located on the right banks of the Grana-Mellea river. It’s origins date back to the first human settlements on the Cuneo plain and the village was first officially recorded in the eleventh century.

The first group of houses was established by Celtic settlers and later became one of the many Roman pagus (administrative centres) that developed along roads of secondary importance. 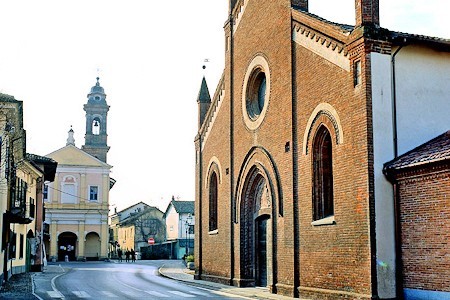 The first official documents about Genola date back to 1050, where it is mentioned in a list of property belonging to the Italian marchioness of Turin, Adelaide, the wife of Oddone I. In 1300, the Tapparelli family settled in the village and built the Castle; in 1349 Giacomo d’Acaja appointed Gioffredo with the title of Count, giving origin to the house of Tapparelli di Genola. The town was invaded in the first half of the fifteen-hundreds by the army of Francesco I of Valois and the emperor Carlo V, and again in 1630 by the troops of Richelieu. The early eighteenth century marked the urban development of the village, which still remains today in the centre.

For centuries the village of Genola was the object of dispute between Savigliano and Fossano. In 1796 Vittorio Amadeo III annexed the three fifths of Genola that were under the jurisdiction of Savigliano as part of the municipality of Savigliano. In 1798 the violent reaction of Fossano, whose interest lay in obtaining the same rights over the remaining two fifths of territory, led them to allow the community in the little village to request the French government for municipal independence. This was followed by a constant flow of petitions, memos, demands for corrections over borders and requests for damages from Savigliano and Fossano, to the point that the French authorities were driven to take measures that would put a stop to any further argument. On January 8 1808 the emperor Napoleon Bonaparte signed a decree that as of 1 January Genola had become an autonomous town.

The village was still to witness some serious wartime events, culminating in a terrible massacre in the spring of 1945, when the retreating German troops burnt eleven innocent men at the stake after having shot a further three. 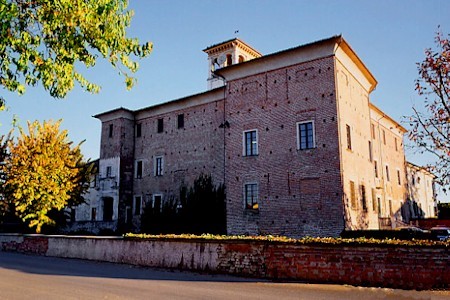 The little village was situated in a marshy plain, subject to flooding, first made fertile thanks to the work of the Benedictine monks. Over the centuries agriculture and livestock became the main activities, around which a town developed with a notable inclination for business, favoured by its strategic position on the main communication routes in the Cuneo area. Today Genola is crossed by a new urban development, favoured by the establishment of businesses, craftsmen and large retailers, with a subsequent transformation of the local economy, which is no longer solely linked to agriculture. Regarding the latter, production in the primary sector is mainly cereals (above all corn), milk, beef and pork.  In particular, Genola is home to a number of cooperatives and associations in the agricultural sector that in recent years have worked on research, training and the culture of nutrition, encouraging the practice of discussion, learning and experimentation, all of which are fundamental for informed and sustainable local development.

Among the historic buildings worthy of note are: Tapparelli castle, the Chapel of the  Santissima Trinità, the Tapparelli building, the Parish Church of San Michele Arcangelo and the Confraternita dell’Immacolata Concezione.