The Quaquara is a typical biscuit from Genola: it is made of a stick of dough with a rough surface, folded into a loop or heart shape. The shape should remind you of a beetle, or ‘quaquara’ in dialect, which is a very common bug in the countryside around Genola in the month of May. 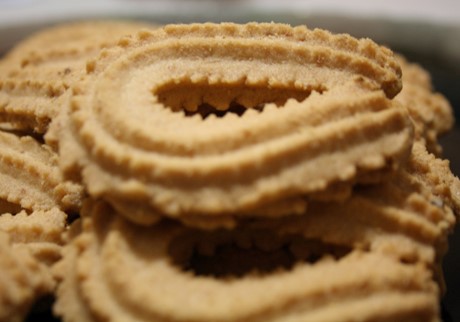 This specialty is produced every year by local families in the months of April and May, to celebrate the town’s patron Saint St. Marziano (third Sunday in May). The first definite information about the origins of this tradition date back to the end of the seventeen-hundreds. For many years the residents of Genola have organized a “communal oven”, run by volunteers coordinated by the Pro Loco (grass-roots organizations that seek to promote their local area) , who for three weeks bake 350 kg of biscuits a day. The dough base is made with eggs, wheat flour, butter, sugar, lemon rind and bitter almonds.  The families prepare the dough at home, each according to their own ‘secret recipe’, then meet for the final ritual of baking. The fire is fed with bunches of twigs kept back from the autumn pruning in the countryside, carefully prepared by local farmers and left to dry until the spring.

The Quaquare are kept from one year to the next in special “burnie” (glass jars with a hermetic seal) that preserve the original aroma. The history of the quaquare and the recipe is handed down from one generation to the next and this pleasant tradition unites the pleasure of a tasty biscuit with the joy of doing something together.

Alvà is perfectly simple, just flour and water, that in particular conditions begin the process of making acids that transform it into starter yeast. Bread made with starter yeast is easier to keep, has a more homogenous texture, a special flavour and aroma and is easier to digest.

Once in traditional bread baking, making starter yeast was also a collective task. Families took turns to keep it, working at dividing it and cultivating it until they obtained the necessary quantity. The methods for keeping and using this mother dough are special: the yeast is kept alive through a regular process of removing the skin that forms on the outside and adding fresh flour and water, combining the ingredients again and finally wrapping it in a cotton cloth tied with string until the next time it is needed.

This tradition is celebrated at the Bread Festival, which is held in Savigliano every two years during the last weekend in September.