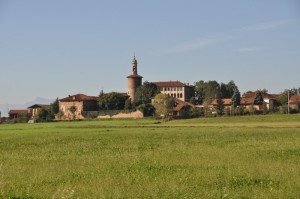 The noble Gorena family from Savigliano built this castle in the Salza neighbourhood towards the second half of the twelve-hundreds. Towards the middle of the fifteen-hundreds it passed to the Cravetta family who kept possession of it until the beginning of the nineteen-hundreds. In 1630 Cardinale Maurizio, son of the Duke of Savoy Carlo Emanuele I, was a guest here.
The two external facades of the building have clearly different styles, the western side is medieval in red brick while the eastern facade features an open loggia which lightens the structure.
Next to the castle is the chapel of the Madonna del Carmine and of San Biagio attributed to the famous architect Vittone and built in 1757 by the Cravetta family, which is without doubt a building of great value and artistic merit.